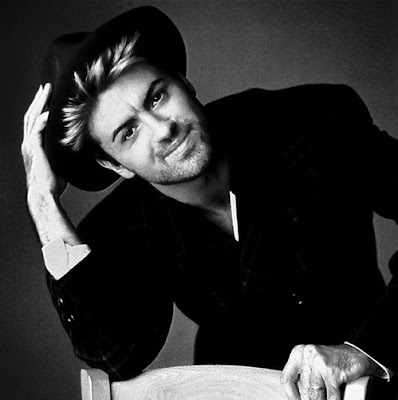 Today George Michael releases multiple deluxe editions of his 1987 debut solo album, Faith. My favorite GM album may still be Listen Without Prejudice, but Faith is like his Thriller. Virtually all hits. Here is George, below, at his most "iconic," with the hair, sunglasses, and The Stubble...

I got into a nerdy fracas with someone on the Popjustice Forums last week. They implied that George didn't really have any depth. And I popped off:

Woah! So he follows up his huge-selling Faith with a properly introspective 70's singer/songwriter album that has a number of very personal manifestos on it (Freedom, Waiting, Something To Save), follows that with Older, an album immersed in grief and then follows that with an album including songs like My Mother Had A Brother and Round Here - and you say he did not dig into his psyche? Throughout his career he consistently upped the ante. I would agree that pot has dulled his senses, but to see him cast a "just" a pop star to Annie Lennox's deep artistry is kind of flat out totally wrong.

Jonathan Ross reports that he's heard new GM material and that it's very good. I think most George Michael fans can agree that he should cut the cannabis and lucidly record a new record. He certainly has enough emotional material to work with, yes?

Fastlove my favorite, without a doubt.
Everything is perfect. The casual sex theme is unrepentant and refreshing, really. I love the bit at 3:25 where the song breaks down and shifts into an amazing middle eight: "In the absence of security.." when you realize that the whole tramping around behavior is a reaction to the loss of his lover: "I miss my baby tonight" One of the best uses of a sample (Patrice Rushen) ever.

followed by, in no order:

Freedom '90
Perfect encapsulation of its era. He did a great version of this for MTV's Anniversary too. Anyone have that?
Something To Save
It's the songs that don't try too hard that are often the finest. This song stands up to the great pop artists of the 70's that George idolized: Elton and Stevie Wonder.
Jesus To A Child
This came out around the time of my first trip to England. A bold choice for a single: a pristine 7-minute ballad. The part at 5:17- "for every single memory has become a part of me" - always gets me. Heartbreaking.
Do You Really Want To Know
This was released at the height of AIDS paranoia and media coverage. He could have done a great video for it.
Kissing A Fool
Jazzy, smooth George. If you are a pop fan, you have probably attempted to belt along with this song. And failed.
Precious Box
Just a few years old, this song returns to the elegant disco of his earlier records.
Too Funky
A strutting dance track. I have a memory of this song that I cannot share on this blog. Everybody wants a lover like that...
Round Here
There is often a of love in George's lyrics. This is a sweet memory of Wham/Andrew - a take on Elton's Captain Fantastic, autobiography as pop tune. "Let me show you where I lived... music felt like rain to the streets."
This Is Not Real Love
I think I am the only person who loves this song. Mutya is brilliant and GM was sharp as a tack to choose her.
Waiting (Reprise)
This is here for the final lines: "Here I ammmmm" - I'm pretty sure he opened the Cover to Cover Tour with this, but he sang it - ironically - from behind the curtain.

My favorite covers - he does a lot of them - are: If You Were My Woman, I Believe When I Fall In Love, I Can't Make You Love Me, Killer/Papa Was A Rollin' Stone, Edith And The Kingpin, As, First Time Ever I Saw Your Face, and These Were The Days Of Our Lives.

I know I'm in the minority, and no dis to Michael Jackson, he is a superb male artist, BUT George Michael is the BEST male artist ever. Period.
Re : Jesus To A Child, that line ALWAYS gets me too! tears just come!

Waiting For That Day and Freedom 90' - I'm way too ignorant and have never heard any of his albums, but love those two. Oh yeah, and Fast Love.

What a breathtaking performance. He absolutely kills me when he's on his game. Finest singer of a generation, and heard from much too little these days.

You're NOT alone in your This Is Not Real Love love! Both singers completely on top of their game there with so much emotion being pingponged back and forth!

I always liked 'Shoot The Dog', must be the Human League sample.

"This is not real love" is a great song!
For some reason I always assumed "Cowboys and Angels" was on everyone's list of great George Michael songs.

Glad to see you all are able to separate crazy, Snappy Snaps George from the man who did this music. He really is a classic.

Been on a George Michael kick since you tweeted the video for "Hand to Mouth". Great choices for Top Ten. I would've thought "Cowboys & Angels" might be on there. "Listen Without Prejudice" is still one of my favorite albums ever. George is one of those artists who has something out & I buy it without having to hear it first. "Something to Save" never ceases to get my attention. Gorgeous song.

On a whole other note... once saw a guy at a mall in LA in full GM Faith mode. Did George have any idea how silly that looked in real life? Oh dear.

In response to those yapping chihuahuas on the PJ forum (many of whom misconstrue b*itching about pop stars to mean being "passionate" about pop), I would also offer as evidence "My mother had a brother", a song offering an emotional journey (for so many people I know) in a pop song that unfolds so beautifully.

Aah George- with a voice like honey and THAT song writing talent I'd still forgive him almost anything.

In a way it's a tragedy that his well documented problems have meant that he has produced comparatively little in terms of quantity since the mid 80s and yet what he has produced adds up to so much more than the sum of its parts.

Hope you don't mind me adding a personal top 11 (in no particular order, and with a quite a bit of crossover with yours!):

(still completely agree with your love for This Is Not Real Love and Precious Box. To my ears Cars and Trains is the other absolute gem of recent years)

I love reading other people's top picks - I like all the songs you listed (and yes to Cars and Trains).

Different Corner
Something to Save
Freedom 90
Fastlove
Jesus to a Child
Careless Whisper
Freeek
I Knew You Were Waiting for Me (w/Aretha)
They Won't Go When I Go (I know this is a Stevie Wonder song, but George's version is flawless)
Young Guns (Go For It!)

...and I prefer the lovely December Song as a Christmas tune over Last Christmas.

These just scrape the surface.

I've had this post saved to get to "later," so I'm forcing myself to make it later. I actually remember where I was the first time I heard "Wake Me Up," I cried the day I heard that Wham! broke up (not sobbing, but I was sad), and I remember playing tracks from Listen Without Prejudice incessantly on my college radio show (I refuse to call it vol 1 since he couldn't ever follow through). Even now, I consider "December Song" a modern Christmas classic. So yeah...a bit of a fan.

Here's my 10, including covers:
Fastlove (by a mile my favorite)
As
Hard Day
One More Try
My Mother Had a Brother
Waiting For That Day
Too Funky
If You Were My Woman
They Won't Go When I Go
Killer/Papa Was a Rolling Stone

This list can change from sitting to sitting, but that's as good as it gets right now.

I thought you might like to know that George is currently in Sydney on holidays (where he bought a luxurious pad at Palm beach last year) and apparently has been recording with Paul Mac and Jonny Seymour.