Blame it on my wild heart 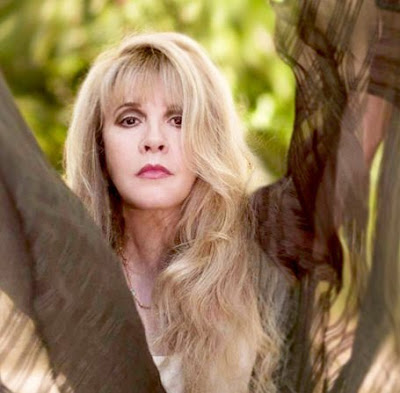 My not-secret love for Stevie Nicks will become an unbridled passion in 2011 when she releases her new album, In Your Dreams (not a Stevie worthy title, frankly) on May 3. The first single, which you can get if you pre-oder the album now, is called Secret Love. It's not entirely new, as you'll hear further down this post.

The 9-song album was produced by Dave Stewart and Glen Ballard, who last produced Annie Lennox's superb Songs Of Mass Destruction. Aside from Secret Love, known song titles are For What It’s Worth, Everybody Loves You, In Your Dreams, Wild Sargasso Sea, and Italian Summer, an epic ballad. Stevie has also recorded a ballad, Cheaper Than Free, for Dave Stewart's own new country rock album, The Blackbird Diaries.

To hear the complete new version of Secret Love, visit Pop In Stereo.

Grab your tambourine, shawl, and some boots you can wear... [pause]... all summer long.

If you don't own Bella Donna or The Wild Heart, they are perfect albums. The latter, along with Rock A Little, is probably the poppiest of her releases.

I am so glad when she hits the vaults and resurrects something and makes it sound brand new. Guaranteed to make a spot on my 2011 best-of list come December.

Oh Richard that is such KLONIPIN phase Stevie!

Don't beat me! I'm keeping with the brandspeak of the blog!

That is also the period of Dolly Parton hair http://www.youtube.com/watch?v=I0aiUmudHoo

Rooms On Fire is my favourite too, along with Stand Back and Leather & Lace. When Cyndi Lauper sings "it's just love's despair" (on Lay Me Down) it always strikes me as being such a Stevie Nicks moment.

How many un-used demos does she actually have? I was shocked that the brilliant Planets was an old song, and I just never bothered with the album because of this.

She's touring with Rod Stewart - watch her on Ellen struggle to name any of his songs!

She has like a trillion unused songs or segments of songs. I think Sorcerer was called Candlebright on an old demo - maybe Dan knows. That album (Shangri-La) is superb. I could easily have put I Miss You on this list.

I don't share the same deep passion for her music as you do, but your list has all my favourites... except Rooms On Fire too ;) Have you ever heard the mega 11 minute Tracy Young club mix of Planets Of The Universe?

Sorcerer was an old demo, but I think it was called Sorcerer. The demo Nomad became Candlebright on Trouble in Shangri-La. Even the crappy Street Angel has a great old demo in "Greta" which is from The Wild Heart sessions. The demo is so 80s it's pathetic!

Thanks! I forgot the whole order of what was a demo etc