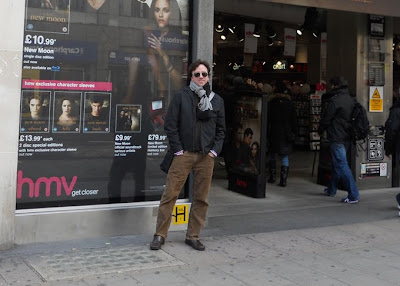 Me at "The Last Record Store" - HMV on Oxford Street, LDN

Artist of the Year: Really, who else but Robyn? Her experiment worked. I wish more artists would release music slowly over the span of a year: it keeps the excitement and energy alive. The music itself was close to flawless and her live performances were goosebump-inducing. As for her "fame"? I enjoy that she has not yet been consumed by the masses.

Producer Of The Year: Stuart Price, for getting his mojo back and helping three artists get theirs back: Kylie Minogue's Aphrodite, Take That's Progress and Scissor Sisters' Night Work.

Most Improved Artist: Ellie Goulding always had the music, but her performance style was decidedly not-ready-for the-bigtime as the year began. She looked terrified on Jools Holland last year, but 2010 ended with a triumphant pop star moment on Top Of The Pops.

Ridiculous 2010 Trend: Tacky use of Fuck in song titles. It was fine - and relevant - to Cee Lo's Fuck You, middling with Pink's Fuckin' Perfect and cynical shite with the now-dire Enrique Iglesias's single, Tonight I'm Fucking You. #demode

She Who Deserves More Respect Than She Received: Allison Goldfrapp for following the amazing, emotional Seventh Tree with the equally exhilarating Head First. This duo makes it all seems so effortless.

Laura Marling, for the middle eight in Rambling Man:

It's funny that the first chords that you come to,
Are the minor notes that come to serenade you.
And it's hard to accept yourself as someone... you don't desire,
As someone you don't want to be.

And a much lighter, joyous moment in Cee Lo's I Want You, the love song of the year:

God is good. He took His time when he designed you baby.
That’s why I want you...
Oh, I'll even quit my job. Lovin' you, I'll make it my job!
Thank you Lord, thank you lord!
This is it, my God!

Live Show Of The Year: Without hesitation, Florence And The Machine's show at DC's 9:30 Club was one of the best shows I've seen in my life. Utterly BEYOND. Also coming close was Robyn's performance on the All Hearts Tour. She's like a pixie James Brown.

Album Cover Of The Year: 2010 was a shit year for album art. No budgets and a label desire to design everything for a smartphone. The winners: Goldfrapp's Head First, which looks even better in 12" form, and Scissor Sister's Mapplethorp'd Night Work.

Best Single Art That Should Have Been Album Art: Hurt's glorious Wonderful Life.

Fab Divas I Whorishly Managed to Get To Tweet Me in 2010: Nancy Sinatra, Jackie Collins, Sandra Bernhard, Kylie Minogue.

Artist Most In Need Of A Vacay: Lady Gaga wins again this year, for obvious reasons. Enough with the crazy costumes, unrehearsed tours and endless references to her little monsters. Just give this woman a long vacation so she can come back strong.
and that's still the case now. Best couple? Theo Hurts and Marina Diamandis, of course.

Most Disappointing Single: Frankmusik's return to pop with The Fear Inside. Love him, but this song is weak.

How Did We Ever Like You? Award: Duffy [shivers] She also gets Worst Single for the screeching, bobby-socksed horror that is Well Well Well

Great Minds Think Alike Award: I don't know anyone who did not say of Duran Duran's All You Need Is Now single, "Awesome chorus, shit verses."

Your London trip was one of my favourite nights of 2010 so I thank you back! Nice to meet those other bloggy types too of course. Bonus point for introducing me to the man and music of Bright Light Bright Light that night. Oh no, I am doing rhyming now.

Agreed about Stuart Price, who else could make me love and buy an album by Take bloody That?

I Am Not A Robot (Clock Opera Mix) was my favourite remix of the year and thankfully you listed it too.

Now one thing I disagree with is Kate Nash's album as my version where I deleted two right awful racket tracks is marvellous. I fogot to put that on my Top 40 of 2010, oh damn.

Thanks for all the musical inspiration this year, you always lead me to discovering some great stuff that ends up in my favourites of the year.

your best of is the best I've ever seen around the web!!!

I loved the Hole record - she's the one-woman Oasis on the song Honey.

Saw Florence last year.....as a musician it annoys the hell out of me when an artist has horrible intonation problems. I thought maybe she was having an off night in NYC last year, but nope....she was under pitch and also sharp in every TV performance I've seen her in. It's hideous.

Her music is brilliant, she's beautiful and she has a great stage presence. I like her singing voice as well.....too bad she can't stay on pitch. I know I'm not the only one who has noticed this....I've asked other musician friends of mine if I were imagining it all. Nope....they all agreed. Obviously the woman needs a better ear piece, because she fabulous otherwise.

I don't get Penguin Prison for the life of me. I'll leave you to create a shrine to him. I'll pass. I disliked Ellie until I heard the reworked album, but I'll take Marina over her any day. Marina at Le Poisson Rouge & Robyn/Kelis at Webster Hall were the concerts of the year for me.

Best pop album of the year was "Queen of Denmark" by John Grant of The Czars....by a long shot. Add that brilliant concert to the ladies' shows above.

Love your blog. Have a great New Years.

@Dan Oh Kate Nash. Whoever let her do that shrill song as a teaser made a fatal error and set the record off on a course for failure. I will go back to it.

@leo Have put your SP blog in my reader!

@diva I had no idea you liked Courtney!

@redlight I've noticed it (Flo pitch) on TV performances though not on the MTV Video Awards - and did not perceive it at the 9:30 show. Re PP, I love him and there are some surprises on the record, but an altar implies I like everything by an artist and I don't play that game. Like the John Grant Honeybear song, which I think I heard about from Dan above...

A particularly wonderful opinionated blog :) It's fantastic reads like this that make me enjoy agreeing or disagreeing with you.

Great post! Thanks for all of the great music this year. Last night I put together a list of favorites for the year and realized that a bulk of them came from you! Looking forward to more in '11.

PS - I don't think Duffy's album is as horrific as you make it out to be. :P

Ditto what Dan said about that wonderful day in London :) Great observations here. There are two tracks i like on the Duffy album but that's about it! Lady Gaga does need a bit of a break - less dresses made from pork chops, more top pop! Apparently Born This Way will replace I Will Survive! What a lofty claim. I sort of can't wait despite my ambivalence towards her!

Happy new year to you Steve, it's always been a brilliantly entertaining read here :)

Have to agree about Penguin Prison, lots of great music and the Royal Palms mix of 'Golden Train' is one of my favourite tracks of the year. Looking forward to his album and I hope to catch them live sometime this year.

Also looking forward to albums by 'Bright Light Bright Light', 'Tim & Jean' and hopefully a cd from one of my new favourite bands 'Echoes'.

Just curious . . . what did you think of Sufjan Stevens' album and ep?