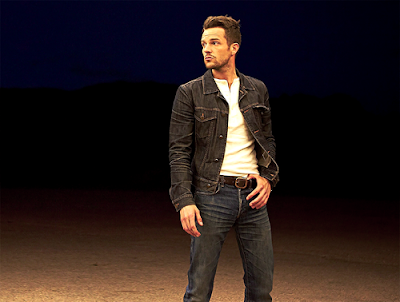 Sweet Baby Brandon Flowers - aka LaFleur - has recorded a solo album. That it may be a pointless endeavor is beside the point. Is it any good? I am ready to pounce...

Flamingo launches with the inevitably titled Welcome To Fabulous Las Vegas. I've long complained about Killers relentless use of Las Vegas imagery in their songs and visuals (how many years are they going to keep those damned neon letters on stage?). So Brandon starting his solo album with Tired Las Vegas Theme #1000 is expected, but... the track begins promisingly with synths and a ribbon of slide guitar before unfolding into the most anthemic song he's done in years. There is an unintentionally campy subtext in hearing Brandon sing, "Welcome to fabulousssssssss, fabulous...." Whatever, straight boy, the song is mega.

The second track, Only The Young, is the most Stuart Price-y/"Human" of the bunch, which is a good thing. The vocal has nice reverb and the song chugs on bass and techno-blips. Again, there is more slide guitar, one of the distinctive elements of this album. Jenny Lewis (of Rilo Kiley and, err Jenny Lewis fame) collaborates on Hard Enough. The verses are liquid, with Lewis on vocal harmony - she's mixed high and adds some twang, but the song is built on pop, not country, and it works. Three for three.

Then it goes horribly wrong. Jilted Lovers & Broken Hearts begins with a gorgeous bass and beat, but it doesn't hold. This one, catchy though it is, fades into a rawk quickly, with tired Vegas card metaphors and "unkind" city imagery. Springsteen is clearly still an influence. I'm actually surprised that hoary old Rick Rubin didn't try to glom onto this project and make Brandon into a rootsy Baby Cash.

Likewise, Playing With Fire also starts nicely, before a chorus that sounds like cats a'wailing. Lyrically, Brandon's cramming the words in, blathering about "rolling rivers" and "charcoal veins," he just sounds like a rube when he tries to go for Big Themes. I always like timpani drums booming, but here they're overshadowed by teensy, tailored LaFluer singing about tilling the fucking ground. When has this pocket diva ever picked up a hoe?

Was It Something I Said - surely there is a Killers song with this title? - is so jaunty, it could be from the Austin Powers soundtrack. Despite dippy lyrics about late night restaurants, it's catchy. Then we're back in Sam's town with the chanty Magdalena. Again, this is a Killers song. Why is he doing a solo record if it's all Killers songs? And somebody needs to circulate Brandon a little; he's done enough of the West. "As a two time beggar..." he wails. Right. The song still works and it needs to be a single.

Crossfire (video) comes on like Christmas with tinkly bells. Sort of tepid as a single, it works well in the context of the album because it's subtle and mature. The "lay your body down" bit on the chorus is one of Flowers' prettiest moments on record. And then he kills the mood with a corny yokel ballad, On The Floor. My consistent problem is that Flowers sings below or above his station: it's all hobos or heavenly grandeur. And don't get me started on the gospel choir, it makes me cringe.

The final track is the lousy new single, Swallow It. OH, the entendres. What will Rufus Wainwright say when he hears this? For me, the song would be unbearable but for the unintentionally amusing moment at the end, when he talk sings, "It's gonna be alright. You're a PERFORRRRRMER!"

"Be an advocate of joy" squeals LaFluer. Fabulous. 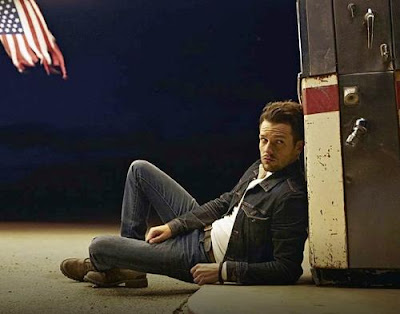 Brandon Springsteen in the darkness on the edge of town...
Posted by xolondon

Well, the clips I heard sounded promising, but I see what you mean about the Vegas obsessions. You'd think he would expand his horizons a bit more by now, as this reads on paper like the sadder, lonelier Sam's Town.

I wonder if you'd feel differently about the album if Swallow It were not the final track? Apparantly the UK has the album this week (US next), and the deluxe edition has four extra songs. Jacksonville and Right Behind You sound particularly good from the clips. This seems to be a new trend. Universal promised US CDs for $10, but what they didn't tell us was that those albums would not contain more than 10-12 tracks. The MIA album had 16 tracks w/4 listed as bonus, but really, the album sounds incomplete without those 4 added. A new trend then in attracting the true fans to seek out all bonus cuts?

I guess i liked it a lot more than you then,,, though i do agree with the count that Swallow It isn't the best closing track despite how proud Brandon allegedly is of his ability to do so (hoho)... i do like the pictures you've picked though!

i can't even think about the music, i am still trying to recover from how good looking Mr Flowers is, nice photo xolondon!

I love the Americana touches, I hear Dylan, Orbison, Reed & Cash in a lot of these songs.

I think vocally these are the best songs he has ever sung and the production is superb.

Magdalena is a classic.

All in all I think this is even better than Sam's Town and is my album of the year so far.

I also have a serious man crush on Mr Flowers. The guy is incredibly cool.