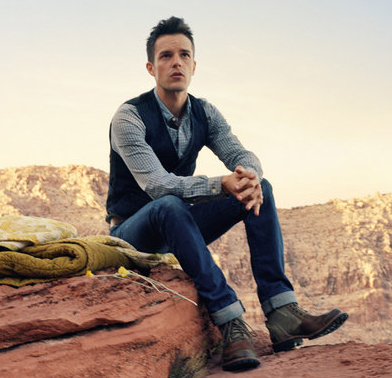 Brandon Flowers just spoke to emusician about the making of his 10-song solo debut, Flamingo. Some details we learn about the album...
ChartRigger, an avowed LaFleurist, posted the album cover recently, if you've not seen it.
Posted by xolondon

Email ThisBlogThis!Share to TwitterShare to FacebookShare to Pinterest
Labels: laFluer

he can sit on my rock anyday. particularly if he looks that pretty. I'm really looking forward to the album - and a solo tour. I'm hoping he'll do smaller venues but we'll have to see...

Paul, he is doing smaller venues, at least before the album comes out. He's playing the Troubadour here in Los Angeles, which is where I saw The Killers the 2nd of...Jesus, I've lost track...times back in August 2004.

I can't picture a Flowerzy solo album doing gangbusters in album sales, since the Killers' own albums have been on a steady decline (commercially) since the first one.

Stranger things have happened, though (see: resurgence of Train).