Quote Of The Week: Ellie Goulding 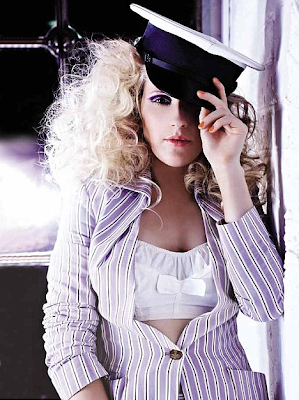 Ellie Goulding - in rare bimbo mode above - talked to Q about co-writing three songs for Diana Vickers' debut album. For Americans, the "warbley" 18 year-old Diana is a fourth-place finalist in the UK's X Factor Contest . She has a fierce fan base and her demise on the show was much-debated.

Q: Recently you've worked with Diana Vickers...
EG: [Interjects laughing] No! No! Last year I worked with her before I signed my record deal because Guy Sigsworth [producer] is a friend of mine. He was like, Yeah I'm working with that X Factor girl Diana Vickers, do you wanna come down? So I said, Yeah why not? I unexpectedly wrote some songs for her album. [hesitating] Um, what do you think of her?

Q: We're asking what you think...
EG: Well me excluded, she's had some really amazing writers. They're trying to make her massive I think. But then I don't know. [again hesitating] I don't think I'm going to write for anyone again. I've decided it's not for me. Saying that, I might but it wouldn't be like that. I'd write with someone.

I doubt Ellie intended to sound arrogant, but it's sort of clear she is not thrilled to be associated with Vickers. Didn't Starsmith (Ellie's collaborator) also participate? There may be a story we don't know, but I'd rather hear honesty from popstars than NOT. Regarding the actual songs, she did three for Diana: Remake Me And You, Notice and Jumping Into Rivers, I actually think Notice is quite sweet, in a lip gloss and teen dreemz way. What do you think?

Don't worry, Ellie. There's a good chance Diana will be a one-hit wonder too.

Well if only she covered Sinead O'Connors Jump In The River Instead - that one has gunshots and blood, which Vickers likes and stuff.

Wow, she did come across a bit badly there. Like she's a coward and doesn't want to admit to liking Diana unless Q likes her, too. In an "I'll take credit if you'll give it but otherwise I'm not saying anything" way. You don't accidentally write three songs for someone! Either stand by your work or don't. And I like both girls but to be honest I like Diana's album more anyway.

Hi Foxfire - the sad thing is that I think generally Ellie is quite calm and measured in her comments. She's pretty smart. This time she seemed to be trying to be casual and familiar and rock. I would not like the Dido comparisons if I were her, but Dido is a big star, so you have to finesse the game!

Jump In The River is a great one, Undisco. Sinead could show these women a thing or two.

I wonder if this was before she annnounced she'd be writing for Cheryl Cole?

Ellie Goulding is hideously mediocre thou. Diana Vickers is too self-consciously quirky but she at least shows signs of actual personality.

I really think Ellie should just sing. Once she slammed a friend of mine on Twitter because he said Lights wasamazing and should be on the album and not an iTunes exclusive.
The thing about Q not liking Vickers and turning Goulding into just happened to be in the studio is annoying.