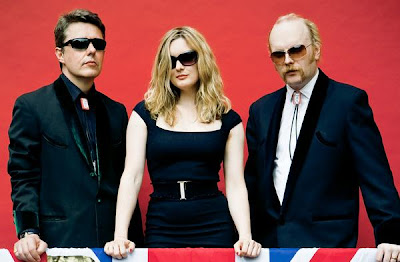 The great Black Box Recorder launched the career of Sarah Nixey (aka here as The Lady Sarah Nixey) in 1998. They released three albums, including the epic pop of 2003's Passionoia, which spawned classics like Andrew Ridgeley and The School Song.

Now they've closed up shop with two new songs, Keep It In The Family and Do You Believe In God?, that form Final Statement. Both tracks are solid, with the latter's lyrics classically dry: "When the game is up and the only way out is a pne way trip to the land cuckoo clocks."

Final Statement is on iTunes in the US and UK. My only complaint? I would have loved one more track entirely in spoken word. For those of you who do not know Sarah's solo work, read here and here.

Last note: The package includes a booklet that cost me $2 and would not open. And thanks to James and Service AV - this release would have totally evaded me.
Posted by xolondon

Must check this out. A very good friend gave me Passionoia in spring (or summer?) 2003, and it became my soundtrack of that year.

In February, I was cleaning under my bed and found the CD in a box (not black). I put it in my car and it brought back some great memories -- house parties, nighttime drives in my then-new car that year...

I saw them at the Southbank centre last year and they hinted at the possibility of a new album.

You've just inspired me to download 'Facts of Life'. Why had I not done this before??!!

Yes, Tea Lady! Do it. If you can get the Jarvis Cocker remix of that song, I recommend it too.

Sarah is a sweet genius. We remixed her in 2006, had her guest (albeit briefly) on one of our tracks last year, but want her to do a longer spoken word/sung piece for us later in the year. something dark, cinematic, epic. BBR is GENIUS. She's also slowly working on a 2nd solo album.