Here am I, dressed in my bravest face 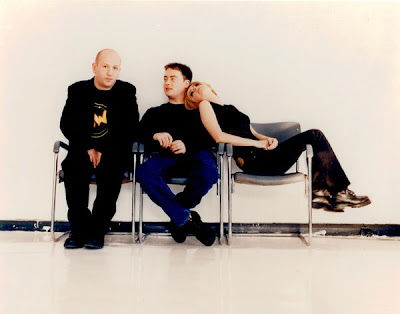 I've written about Dubstar before. They were one of my favorite bands of the 1990s. Perfect British radio music, ranging from janglepop to glistening electropop to stately English balladry. Epic stuff. My favorite tracks is, without a doubt, Stars, one of the top 20 songs of the 1990's (a list I've not yet published)...

Dubstar recorded a few superb albums and then, after one meh release in 2000, bailed ship. Lead singer Sarah Blackwood went on to form icy lady-electro combo Client and the guys, Chris Wilkie and Steve Hillier... who knows? In 2008, fans got all cranked up when it looked like the band would reunite and then... the whole thing suddenly imploded in a distasteful public meltdown that threatened to ruin their individual reputations.

Apparently the drama of 2008 has been unwound. [!!!] The group have reformed and plan to record a new album (United States Of Being) for... 2011? Their first official release is for buffetlibre's Amnesty campaign, a cover of I'm In Love With A German Film Star, an old Passions song most recently covered by the Pet Shop Boys with Sam Taylor Wood on vocals. You can buy it here as part of a cheap bundle. Who knows what the future brings, but Sarah's voice is yet another English gift to music.

Wow I just read that whole 2008 drama thing. I actually vaguely remember being disappointed about the reunion not happening, but I never knew it was such a vicious public fight. Now I can't believe this is on again. I loved Dubstar, and I really hope it happens this time. They'd be especially welcome now that St. Etienne seems to be on permanent hiatus.

Thanks so much for following this story for us. After the last Client album, which was decidedly lackluster to the point it didn't even get a physical release in the US, this is fantastic news. I echo daavid's statement regarding Dubstar vs Etienne--has a band like Etienne ever been so busy releasing so little new material (but thanks for the deluxe remasters).

Dubstar were to Saint Etienne what Erasure were to the Pet Shop Boys I'm afraid: the Poor Man's version. Don't get me wrong, I like Disgraceful but, let's face it, after the "ooh look, the cover looks a little bit like a vagina" calmed down everybody basically stopped listening. Shame really, because although as you so rightly point out, Stars was one of the 90s' best pop songs, now, I reckon, no-one's that arsed about Dubstar.

You're right Jams, Dubstar had probably no more than 5 good-to-great songs but I think the PSB/Erasure comparison is a bit unfair because Dubstar did a lot less music than St. Etienne.

I actually find Dubstar's sound closer to what Sarah did on her own, stuff like "Taking off for France".

A bit of trivia: Did you know that Bob Stanley once said he wished he'd written "Stars"?

BTW, I was referring to Sarah Cracknell, I just realized they're both Sarahs.

Jams FINALLY comments after 5 yrs and it's to poo on Dubstar!? I am distraught! [hand to brow] Daavid, do not listen to Jams!