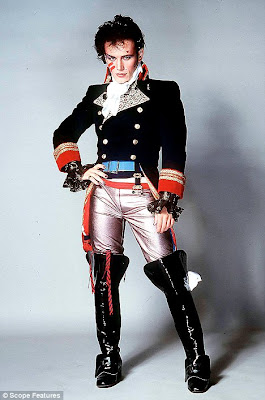 Occasionally I fall prey to Old-Geezah-Sndrome of the Rock variety. You know, "Music these days sucks. When I was a kid..."

But seriously. When I was a kid, Adam Ant was a star. And we don't have anything like it these days. Nothing so ambiguous or genre melding. Maybe MGMT are sort of like that, but the songs aren't really there, are they? It's prog, not pop. Adam was home-grown, home-sewn... a minxy mix of mascara and balls.

So, now in 2010: Adam has announced his return to music. If you care one whit, the new Quietus interview is a MUST-read. Take this quote about how he kind of gave up:

I should have been more U2 about it. What they do is they don't change their formula. I know what their next record is going to sound like. I don't buy it because I hate them, but I like Edge, and I like the band. I just don't like fucking Mr Bono. (Does an Irish accent) 'Every time I click my fingers, an African dies.' Well, stop clicking your fucking fingers, then! I don't like his lyrics or what he stands for or represents, how he dresses or anything. But I do actually like the fact that they had the bollocks to last, which I didn't.

Brilliant quote. For your edification, my favorite Adam Ant song is Desperate But Not Serious - especially that bit at 3:10 when he softly moans. Pop kids should all have this on their iPod. By the time the video was produced in 1982, he was a major label star - the way he's shot proves he was a commodity, but I love how both the punk kid and the Brit wit peeks through in his movements and lyrics.

I completely agree, Adam was the first pop star I ever clocked on to.

You do have the stars like him these days, unfortunately they are called Lady Gaga

Hey Kev - Check out The Quietus piece -he talks about Madonna and Lady Gaga!

God I love Adam Ant. I seriously think he's been more influential than people give him credit for.

Didn't know he was returning to music. This is VERY exciting!

Get new shitty jokes if you're going to hate on Bono.

He probably said a child dies every few seconds. Bono is a force for good, but I can see why his presence wears some people down. Cranky people. I think it's similar to Oprah hate in a way.