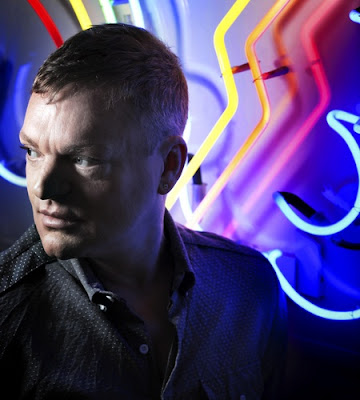 There is so much to respect about Andy (Erasure) Bell, notably his career longevity, his sense of humor/style (they're intertwined) and his role as an AIDS advocate. Suddenly he has a new solo album out on May 25 and it's called Non-Stop. His last solo record had a set of lovely songs, including a duet with the legendary Claudia Brucken of Propaganda. This one, however, could be quite mega because it is co-produced and co-written with Pascal Gabriel, most recently responsible for tracks with Ladyhawke, Marina and Goldfrapp.

The odd bit. The album conclude with Honey If You Love Him, a duet with Perry Farrell (of Jane’s Addiction). What? The press release also has this intriguing bit: "He has even purposely changed his vocal register and style for much of Non-Stop, putting clear blue water between his soulfully electronic solo voice and his gleaming, poppy Erasure work." Not sure what the "clear blue water" bit means, but it sounds poetic.

The first single is Call On Me, out May 10th, but two songs are already out. Both were originally released in Europe under the moniker Mimo (really, why?!)

Throw that in too!

I'm looking forward to this!

Clearly Andy was ahead of the curve anticipating an Avatar/Twilight hybrid a few years too soon. I enjoyed a few songs off the last solo album including the Claudia track. I suspect he released the initial singles under an alias because he spent his interview time promoting the last Erasure album complaining that no one knew he had put out a solo album so why not start over with a new name since going by Andy Bell didn't get any exposure. Don't have high expectations for this one but I always hope to be surprised.

Just saw that there was a Fenech Soler remix of "Running Out"...so checking this one out immediately!

Thanks for the Mimo heads up. Would not have known (in my ignorance; even though Andy Bell is one of my favourite singers, ever).

My favourite Erasure song ever would be "Chorus" (and the Youth remixes are deliciously epic). Though, I have to say (and it has crossed my minds many a time) is that the new Goldfrapp album reminds me (sonically) so much of Erasure's "I Say, I Say, I Say" album. What do u think?

One other thing, does "Non-Stop" include his supposed cover of the old *ahem* Otto Von Wernherr & Madonna chestunt "Cosmic Climb"?

I cannot wait for this, and I feel that those of us here can make at least a good 10 copies sold. It was disappointing seeing Electric Blue being so ignored, but then again, it wasn't SO different from the Erasure we know that we couldn't really understand why it seemed like he was busting to get it out. It felt like Mimo was a way of releasing music without kids saying, "Hey, isn't that the old dude from Erasure that wears inappropriate hotpants?" Unfortunately, the "Mimo" name was already used an a lawsuit threatened. I thought Mimo was a clever abbreviation for music in/music out, sort of like computer speak, but what do I know. Let's ask Andy himself!

Love Oneself with Claudia is an epic song for sure, but I also loved their other duet, Delicious, from the same album. It actually slams a little harder.

My mate snogged him at a Kiki and Herb gig. He said his tongue was hot and big.

No Cosmic Climb on this, by the way.

yes, Chains of Love is deserving of an "edit post"!! Clear blue water voice? Sometimes I wonder if they people writing these press releases even listen to what they're promoting.

what? No Star or Chorus? WHich I love in different ways.