A shirt everyone needs. 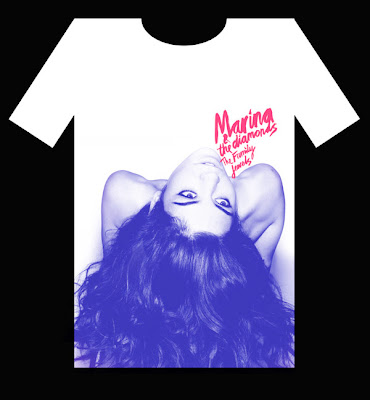 Yes, that is the word "shirt" - did your eyes deceive you? Anyway, I follow Marina on Twitter and she posted this piece of majesty this morning.

That is a pretty cool shirt! I need to hear this full album.

Amazing record--will be hard to beat this year, and I have a friend who wholeheartedly agrees. Glad to see she's getting good reviews SOMEWHERE--that Independent reviewer makes me not want to read their reviews anymore (Andy Gill, I think?). Did he even listen to the same album I did? I know people are allowed their own opinions, but seriously, should we trust somebody with radical opinions like this to be a tastemaker? Poor girl doesn't need someone derailing her career before it's even begun. Even 3 stars would have gotten the point across.

I wish i could translate that into American sizes. Sounds awesome.

Ha! She also has a TINY waist, thus enhancing her "assets"...

The Independent is usually my music review paper of choice but not after that shit mess of a Marina review. I don't know what he listened to but it must have been something completely different.

Also: I want that t-shirt.