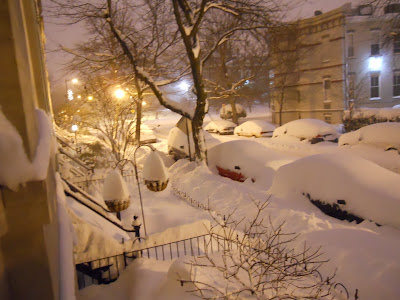 A winter night on my street

I took a little mini-break from my blog this week. Enigmatically, it involved a lot of glue in my hair. Long story! Anyway, I want to start by bitching about Kelis, who I think went a little too far with her crass, look-at-me reaction to PETA's complaint about her use of fur. Read her crazy pro-fur pro-Kelis press release. A big publicity stunt. I don't care of she wants to wear fur and PETA can be antagonistic; I just think Kelis came across as silly. Wow us with a song next time babe.

Richard Ashcroft is coming back. Again. Urban Hymns was on my fave albums of the 90s and his solo debut, Alone With Everybody. was on my fave list for the 00s, Since then, he's had two middling solo albums and, most recently, a reunion record with The Verve. NME has the video for his new single Are You Ready. The album is called Redemption and, after the weak Verve reunion record in 2008, he's going to need some of that. Seriously, he is a brilliant singer/songwriter; I just think he needs a strong collaborator to edit his ideas.

All of which reminds of me of another reunion- Suede (Coming Up-era, without Bernard Butler) is getting back together for shows.

In the eyebrow-raised department, Hole is releasing an album without any original members but Courtney Love, She Who Does Everything She Can To Sabotage Herself. Melissa Auf der Mur, who said last year, "All I can tell you is that I like singing ooos, ahs and la-la-las behind [Courtney's] voice," says she has not been included, nor has Eric Erlandson and that a real reunion is looking less likely due to Love's behavior. Sadly typical news from Loveland.\

A tweep sent me this fantastic uncut interview with Eg White about songwriting. Worth your time.

Bad news (f0r me) regarding Erik Hassle. The new version of his CD omits my favorite song, Make It In Time.

Delphic. I heard the record and need to play it more, but I don't really think it re-invents anything, as Pete Paphides says in The Times. That article is worth reading. So far, my favorite song is the album closer, a 6-min+ track called Remain.

The Boyzone video is painful in a way not intended. I believe the emotion (lots of tears rolling down cheeks) is genuine, of course, but I question the decision to stage it for cameras. By "stage" I mean rig up lighting and sets. If the footage is from a documentary, it does not completely come off that way. The song itself is okay, barring that awful schmeggae lite coming in midway.

Have you downloaded Alicia Keys booming Unthinkable yet? Hear it now.

What does Thomas Dolby think of Prefab Sprout?. Read this post at Tin Can Pot.

Kate Nash has cute new hair AND is putting her lost masterpiece Don't You Wanna Share the Guilt (play the original) on her new album. I am worried about how her sound will gel with producer Bernard Butler's. Apparently it's girl group-y, but I like her best when she is folky.

Which reminds me of something gossipy: Duffy has supposedly parted ways with her management, band and co-writers. Why am I not surprised?

Ke$sha was on NPR in America this week and irritated me more. This is the music that a girl with a near-perfect SAT score decided to create? "I just wanted to have fun."

Paul Epworth has been twittering about being in the studio with Florence + The Machine, making what he calls "kind of Siouxsie's dreamhouse" music.

Sad news that Rufus and Martha Wainwright's mother, Kate McGarrigal, died of cancer this week. Any fan of either artist knows about Kate- she was and will be a huge force for both of them.

Did you know that Nile Rodgers produced an album in 1981 for Johnny Mathis? He did and it - I Love My Lady -was never released! I learned this from Alexis Petridis on Twitter this week. More info via Disco Delivery, where you can download the title track.

An unreleased Madonna song appeared this week - Across The Sky, one of the collaborations with Justin Timberlake and Timbaland. My assessment: it needs to be re-recorded. The song has glimmers of hope, but like all recent Timbaland productions, it's junked up with the non-singing producer ranting and pointless tikka tikka noises.

I've actually been playing a lot of old music while awaiting something new. This week it's been...

Scritti Politt's Oh Patti - the one with the gorgeous Miles Davis solo. Jay Jay Johnanson's music from Rush, including the title track, The Last Of The Boys To Know and Teachers. He's working on a new record for 2010 and my guess is that it will be a return to uptempos.

I have decided I want to write a song lyric. Anyone got a song with a melody?

Finally, anyone know of any good shows in London between March 12 and 22nd?

Hi Stephen, Thanks for keeping me updatet! Just wanted to say, you might wanna consider this song in your 2010 list ;)
http://www.youtube.com/watch?v=hA9UA3CSnms
Best, Karin

Oh yeah I've been following Eg White's career as a song writewr for a long time. He's come a long way since being in Brother Bwyond (shit 80s boyband)! His album sounds intriguing, like that other bloke who writes with/for other artists...er... forgot his name but he might have worked with Eddi Reader. Sorry, I have flu!

The only show on London in that period I can think of is the one where I show you a nice cup of tea and some shops.

Wow re: Nile Rogers/Johnny Mathis. Will have to check that out.

Scitti's "Oh Patti" is such a beautiful song. I love love love Provision. Fantastic album and one of my faves of the 80s.

I agree re: boyzone (just blogged about it myself) it seems quite unnecessary. They did a similar clip on Dancing On Ice when they were introducing Mikey from the band... it seemed like they felt they had to, but it wasn't done particularly well :(