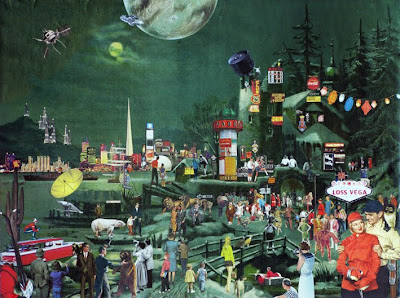 I was about to say that I don't even remember anything about 2003, but I think I blocked it out. My one image of that year is breaking the phone in absolute frustration and anxiety. So dramatique. But about the music, 2003 was a great year: I was passionately obsessed with every song below, all of them. More than any other year in the 00s. The top three are, by the way, truly the top three songs.

Turin Brakes Painkiller (Summer Rain)
"My love giving me head / Feeling very guilty breakin the bread..."
Rufus Wainwright I Don’t Know What It Is
"Putting all of my time in learning to care / And a bucket of rhymes I threw up somewhere / Want a locket of who made me lose my perfunctory view / Of all that is around / And of all that I do."
Stars Elevator Love Letter
"My office glows all night long / It's a nuclear show / And the stars are gone / Elevator, elevator, take me home." A MASTERPIECE, this song!
Roddy Frame Surf
"When I was young the radio played just for me / It saved me / And now I don't want anyone who wants me, baby. / Tuning out the darkness / Turning on the dawn / If life was like the songs / I'd surf into the waves / And in a splash of silver she'd be gone.
The Cardigans Communication
"Well this is an invitation / It's not a threat / If you want communication, that's what you get / I'm talking and talking but I don't know how to connect / And I hold a record for being patient... / With your kind of hesitation / I need you, you want me, but I don't know how to connect / so I disconnect."
Erlend Oye Like Gold
"My baby, my baby, you're everything to me / When you're gone, there's no one / I'm just lonely / "My baby" - I've never used those words / But that's all I could call / Someone sweet as you / Someone sweet as you.""
Goldfrapp Tiptoe
This song is not about the words, which I cannot understand. It's about the atmosphere.
Madonna Nothing Fails
No particular line, this song is about the most honest vocal Madonna has ever sung. A sensual Mary Travers!
Deepest Blue Deepest Blue
Love the idea of the title. Who is your deepest blue? I could tell you mine, but I won't.
Pet Shop Boys Miracles
"Thunder is silent before you / Roses bloom more to adore you too / Miracles happen /when you're around."
Fleetwood Mac Everybody Finds Out
"When love starts out in the darkness / It doesn't do well in the light / Affairs of the heart / That start out in the dark/ Usually stay with the night. / When nobody sees them / At least not together / She rarely goes out / She speeds everyday, waiting for the day /When everybody finds out." SLAMMING EPIC.
Annie Lennox Loneliness
"When I call your name, I'm gonna scream out loud and say / Here I am, standing in the crowd / You say come to me with your open mind / You never know what you still might find."
Simply Red Home
"So fake cool image should be over/ Cause I long for a feeling of home / Real life depicted in song." What does that mean? Whatever , it flows.
Beyonce Crazy In Love
"Got me hoping you'll page me right now." Nice Sopranos reference too.
Pink Catch Me While I’m Sleeping
The best song Prince never wrote. Everyone should download this.
Will Young Stronger The fist song that made think Will would extend beyond the limitations of his Idol start.
Alicia Keys Diary
"Lay your head on my pillow / Here you can be yourself / No one has to know what you are feeling / No one but me and you"
Thomas Newman Angels In America theme
No lyric, but a beautiful song. I wrote about this once and promptly deleted it.

The album of the year is perhaps the best of the decade, Want One by Rufus Wainwright.

and here are some epics that should be on this list... Josh Rouse Comeback (Light Therapy) / Shack Carousel / Starsailor Telling Them / Sugababes Conversation's Over

I miss the American Life Madonna so much. Yes, she was sometimes hard to take but the music was so real then, even the drinkin' a soy latte. I buy that 100 times more than "see my booty get down like that." "Nothing Fails" is the gorgeous centerpiece of that album.

On the other hand, Bare is still the one Annie Lennox album that I have a hard time finding a way into. Perhaps I should give it another go.

Insert obligatory "What about Britney?" post here. This was the year of In the Zone, you know!

Bradley, I veered away form Britney in like 2000! American Life is not a worthy song, but Nothing Fails is. Body Language - yep, Slow is the one, but I just could not fit it on the list. There were actually about 30 songs I left off the list!

Dan, Bare has some great songs. I love The Hurting Time.

Bradley, I veered away form Britney in like 2000! American Life is not a worthy song, but Nothing Fails is. Body Language - yep, Slow is the one, but I just could not fit it on the list. There were actually about 30 songs I left off the list!

Dan, Bare has some great songs. I love The Hurting Time.

2003 was the year I finally began to obsess over Roisin Murphy because of the wonderful "Familiar Feeling" and it's corresponding video:

oh ditto on your Madonna and Will Young thoughts. And yes, that pink song is just delicious. I think my stand out memories from the year (musically) include a great month for out and out pop in Sept when Rachel Stevens gave us Sweet Dreams, Gareth had a little bit of Sunshine and A*Teens were rocking my world with their cover of One Night in Bangkok. Plus (i'm sure just an oversight on your part) deborah gibson returned with a lovely album of broadway standards :)

these are some great ones! communication was one of my favs that year also...that whole albume really. but i'm just blown away that you included thomas newmans score, it's beautiful. he can kinda do no wrong in my book. the title score, ellis island and Mauve Antarctica have got me through many a moment. ;)
-mclean

"Miracles" is still the best PSB single of the decade. It's so gorgeous.

Stronger is the only Will song I could possibly say I love.

I listened to American Life what felt like 24/7 along with 3 songs from Black Cherry (Tiptoe not included) - it really makes you sink into your own thoughts.

My favourite lyric personally was "Got my sprung and I don't care who sees".

Also, do you believe "Communication" was covered in Chinese? I miss The Cardigans :(

I own your top 3 and yes great bands/artist there. I got into Rufus later than I should (maybe via your blog like a lot of good things, same with Stars). The Cradigans song is form my painting the house soundtrack, flashbacks ahoy!

Gotta ask. Why did you break the phone in absolute frustration? If you feel okay with telling us. You don't have to, you know.

If I were forced to pick one, I'm fairly certain that the Cardigans' Long Gone Before Daylight would be my favorite album of all time. Communication is such a beautiful start to a masterful album.

I agree with the more American Life Madonna sentiments. I love this list and the collection of them so far...

As for Bare... I'm with Dan on it being the one thing she's done I couldn't really get my head around. For a while, my BFF Ben and I were actually calling it "Bore"...