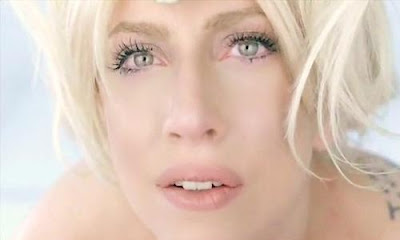 1 So Happy I Could Die is my favorite of Lady Gaga's new Fame Monster songs. That it's about rogering oneself does not hurt. I am all for that. I touch myself, can't get enough. It's also got a straightforward, no-frills vocal.

2 Which is one of my problems with Gaga: She tends toward vocal histrionics. The leak of Bad Romance was much purer on the chorus. And Speechless. WHAT is that drunken, slurry second verse? I realize she is singing about a drunk, but it would be more powerful without the overacting.

3 The new artwork is pleasingly economical - just simple, clean and iconic images. The Bad Romance video (watch it) is brilliant, but also a "kitchen sink" production, cramming every possible visual into five minutes, including heavy product placement. Gaga consistently gilds the lily. It's too much! Best bits? The polar bear cape (?) look with sunglasses, the final "crispy" shot and, of course, the crying moments (see above).

4 Bad Romance's chorus still sounds like Bon Jovi to me. I don't like the ga ga ga ga bits, but the song is catchy as fuck nonetheless.

6 Monster reminds me of something... Backstreet Boys? What is it?

7 The spoken Vogue rip on Dance In The Dark is grating, especially the naff referencing of Jon Benet Ramsey. And she sounds like a 50 yr old - what's the deal with that? The song basically works though. Some very big 80's synth lines running through it.

8 Telephone is the kind of hip-pop hybrid I cannot tolerate.

9 I wonder why she didn't just add about 3 more songs and hold it for late spring? A full album. She was probably thwarted by suits ("too soon!") or didn't realize she'd be so "fertile" on the road.

10 Finally, the hype is out of control. At least it's possible in 2009. With 8 tracks, this is is not the album of the year. It's a solid piece of work, though not groundbreaking. I feel like all the "greatest this, greatest that" is really just excitement over the release. Simmer on it and see what you think in 2010.
Posted by xolondon

Monster reminds you of Just Dance.

'Dance In The Dark' is finally growing on me. There's something very bittersweet about the synths and the Vogue-esque name check.

Much as I love both Gaga and Beyonce - 'Telephone' is a little too hectic on the ears at times. Something tells me another grotesquely fashion-forward video by the pair will win me over anyway...

I can see where you're coming from, but I think we differ on a couple things. As you know, I was not a big Gaga fan, as I found the image(s) a bit stolen and the lyrics leaning toward the trashy, backed by some rather generic beats. However, there is no denying she has stepped it up on the Fame Monster. The production is MUCH better (and bigger)...these songs just sound HUGE in my car, even with the volume down. They are also super-catchy, and the lyrics and vocal delivery are much improved, with provocative themes that rarely sink to banal, and a growl and a bite that wasn't really there before, the product of growing confidence. The Fame was a good debut, but Monster just takes it to a much greater level.

Her performances have also been quite engaging this year--Brits w/Pet Shop Boys, Much Music (with sparkler-conebra), VMAs(Paparazzi), etc., and has proven she can sing live, as well as playing a mean piano. It's refreshing to see such a young artist who could have very easily gone the Vanessa Carlton route (see the youtube vids from pre-Fame) really push herself, rather than fading into just another singing-songwriting wallflower.

Lastly, I think what Gaga has done with Monster is begin to redefine what an album is. Back in the 70's, Kraftwerk records only had 6 or 7 songs. So did many disco albums. In the 80's, many Prince albums only had 7 or 8 songs. Madonna's debut only had 8. Duran Duran's first 3 albums only had 9 songs (Seven & the Ragged Tiger had 8+1 instrumental, Arcadia's also had 8+1 instrumental). ABC's Lexicon had 9. David Sylvian's debut had 7. The length of albums began to bloat with CDs and artists like Tori and Alanis who insisted on making every release a double length affair (country albums stayed short though). Even Prince betrayed his early parameters by cranking out a couple double albums (albeit quite good), then triple albums in the 90's to the present. I'm glad Gaga took ownership of this project and said it could stand on its own. Maybe more artists will be more selective about what actually ends up on their releases, and not just put everything on them to be edited out for an iPod playlist. She makes a concise and cohesive statement. Even Speechless at the halfway mark harkens back to vinyl records--I really feel like I'm listening to the end of "side 1" as that song closes. Not the kind of song I usually go for, but here it works. I love how she isn't afraid of wearing her influences on her sleeve.

Fame Monster isn't perfect, but it's damn close, and better than the Fame by a long stretch. You do bring up some good points. She doesn't sound 23, but she does sound like a woman, and she can sing live--who knew she had such Christina-like pipes? And the award for most improved goes to...

so happy i could die is my favorite as well!

Maybe my review seemed more negative than I thought? ;) 5 and one half /8ths of this record is very good. And this from someone who basically liked nothing on The Fame.

Normally I'd find this album very good, but the thing is... five good tracks is NOT a good number. Sure, the album is only eight tracks long, but if you delete the duds (for me that's "Teeth", "Alejandro" and "Speechless") then you're left with FIVE. Why should five good songs be acceptable just because she decided to make a short album of only eight tracks.

And, sure, albums in the '80s had only 8 tracks, true, but a lot of those were 6minutes long and when all 8 are classics then there's no problem. "Monster" and "Bad Romance" were prime for 6 minute long album versions. It just feels like they cheapened it a bit.

I still don't feel she's quite merged her image with her sound though, but thankfully she's not doing songs like "Money Honey", "Beautiful Dirty Rich" and "Boys Boys Boys" while also passing herself as some avant-garde lesbian sexbot.

Albums are definitely too bloated these days, but would it hurt her to add a couple more songs on there of the calibre of "Monster" or "Telephone" (my personal fave - the Beyonce rap is my favourite bit of the entire album)? If it was a 10-track album with 7 great songs then I would think the entire enterprise was a far bigger success than an 8-track album with 5 great songs.

Of course, some love all 8 (or 7 because I don't know anyone who truly loves "Teeth") and that's nice and all, but I'm not going to give her a free pass because she's the bastion of pop or whatever when I only think five of her songs are worthwhile.

Can you tell I've already been hit by hate comments since I posted my review? BTW, "So Happy I Could Die" is right up there with "Telephone" and "Monster" as my favourite.

Glenn, ignore the mean comments (or embrace them! ) - that happens when you post on someone who has intense fans. Those people often LOVE EVERYTHING their artist/icon does.

Hey Glenn; *I* love "Teeth", it's "Speechless" I was not love-loving but certainly am now.

Aside from the "I've gone nuts" attitude I've taken on a few social networking sites in relation to this record and GaGa herself, I am certain my views or opinions of the album won't change as we hit 2010. I have played this record over and over again for well over a week now, with very limited breaks in between that involves other music. Yes, I'm somewhat obsessed with it and everything that's come with this particular album and its campaign, but I'm not blinded by it. I'm just worried some people might view it as that, which may be the case for some people that are going bonkers over her, but that's definitely not the case for me.

Speechless seems out of place but I do still enjoy it. You're bang on about So Happy, which has actually become my favourite after Bad Romance. BR will be my song of the year because it is, by far and away, the song whose lyrics I had made a personal connection to THE most in 2009.

The best bits of the clip, you're also bang on with that too. The crying moments are actually beautiful, she looks gorgeous when she cries; who knew. I also love that not-really-there red outfit at the end, when she goes stark-raving-mad with the dancing and does her best Jane Fonda Workout impersonation. I - admittedly - lose my shit every time.

Countpopula: I love what you said about it feeling like side A of a vinyl ending when Speechless comes in. Never thought of it like that.

Sorry if this comment is all over the place, I've been up busting my balls writing uni assignments since 7am, and it's just gone 2am THE NEXT DAY :(

I agree with Adem that I am not one to generally go "bonkers" over an album and set it aside in six months. While every song on FMonster may not be to everyone's liking, Alejandro is actually my personal favorite. Can a song get more catchy, seriously? The production is just top notch as well, and I have a feeling fans in latin speaking nations may go gaga (pun intended) over this. I actually enjoy Teeth as well--there's something a bit dangerous about it, and she turns in a snarling little vocal performance. Not the best "song" in the conventional sense, but a great close to the album (which some may now call "mini"-album).

One other thing--do songs really need to be 6+ minutes to qualify as album length anymore? It seems as though everybody's attention span is less than it used to be, and when a song can say everything it really needs to in a short length of time, why prolong the process? I'm all for songs stretching out when they need to, but these just didn't need that. Even Madonna's sophomore album, Like a Virgin, had only 9 songs, with the longest being Love Don't Live Here Anymore at 4:50 and Shoo-be-doo at 5:17 (and both of those songs SHOULD be shorter).

And GaGa deserves to be run out of pop by a mob wielding sharp sticks for the product placement in the video.

Great comments by everyone. I was totally immune to the GaGa Phenom until BR (with the Grum and Hercules & Love Affair remixes bringing me over to the song).

Unlike XO, I really dig 'Telephone'. The production is punchy and the song is relentless, with the Beyonce bit really going for the musical jugular. Love it!

A lot of FM sounds very Euro to me, with elements veering dangerously towards La Bouche territory. I am surprised I like!

Also, is it just me, or does the synth line in 'Dance In The Dark' sound like it is lifted from 'Careless Whisper' (but just sped up a tad)??

Well, Somehow, I've actually not heard it yet!!!

Anyway, Bad Romance is fantastic, that chorus is absolutely glorious and I'd love to hear her take her vocals up there a little more!

It's a killer track, with a fantastic video - so bring on the next bit!