Note to Pet Shop Boys: Hurry it up 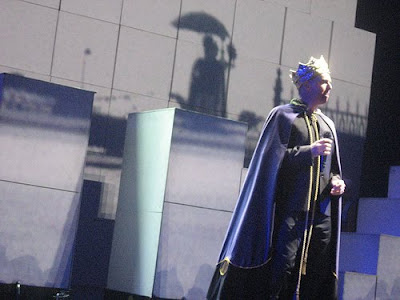 One of the highlights of the current Pet Shop Boys tour is their grand version of Coldplay's Viva La Vida. It turns out Viva lends itself well to Pet Shop Boys natural inclination toward grandeur. They give good anthem! And it doesn't hurt that several of the Boys' bestselling songs are covers.

So where are they with their long rumored single version that may or may not be out in December? Swedish popstar Darin - it all comes back to Sweden, doesn't it? - who was a Swedish Idol runner-up back in 2004, has just released his version and I've heard he's launching his music in the UK. Hello, Boys? Announce it and release it or it's going to be an awkward moment!

I don't think Darin has done a video yet, so you can "hear" his version below

Factoid: For those that care, I should note that Darin was working with Moroccan producer RedOne long before that newly famous blond woman.
Posted by xolondon

Keep up to date on our adventures. said...

Mmm - I'm not sure PSB will release this...I dont think it's going to be on the December EP and thats OK with me. Personally I think it's best as a 'live' thing - although I haven;t seen the show yet Great song though even though I hate Coldplay.
I'd much rather Neil and Chris had hits with their own magnificent songwriting.

I agree with Love in C Minor.
And, to be honest, is Darin's version has any chances to be recognized outside Sweden? It's very, very weak...

Format#1 Christmas
1. All Over the World [new psb remix]
2. New track (New Christmas song? - some rumors that Shirley Bassey doing it...)
3. New track (Requiem In Denim and Leopardskin?)
4. New track (The Loving Kind demo? My Girl? Without You - collaboration with Madness :))

Well, no one knows for sure, but I have a good source. I am not expecting many truly new songs.

PS I doubt we;ll see any BP mixes other than the demo. Definitely not Vinny's mix.

Not releasing "Viva La Vida" would definitely be a foot put wrong for PSB. The campaign for "Yes" went terribly lopsided after the release of "DYSMC?". It has been on the cards for months and they certainly had enough time to get that together once they heard the overwhelming fan chatter.

And those Vinny Vero mixes are going to be a hot commodity on the black market if they aren't released soon. :) I hear they're disco-tastic!

Darin's version leaves me cold. It's basically, U2 lite without the grandeur of the original. PSB keep that sound of royalty in tact in the live version. With just a hint of camp thrown in for good measure.

I smell a mistake about to happen.

I think Darin's version is rather lovely, but I would love to hear a full PSB version. I think Darin is starting with Breathing Your Love in the Uk - and you are right - His Flashback album was the sound of 2009 way before 2009 happened!

PSB simply have to release this song in a studio version. Maybe their days of having chart topping hits by covering songs are gone, but what a fantastic version this was in concert. The rest of the world now needs a chance to hear it.

I'm quite bummed about the absence of those Vinny Vero mixes. I know he is putting forth his most unbiased opinion, as I tend to agree that it seemed as though while PSB were out on tour in the US, their singles campaign for Yes began going pearshaped. When the cat's away, as they say.

The Beautiful People CD single is nice enough (I actually like the demo version better than the album--it's more intimate). RedOne would be a very interesting choice of producer for them next time--he could bring back some of that thick, clubby darkness. That being said, I didn't really think much of Darin's VLV--rather pedestrian.