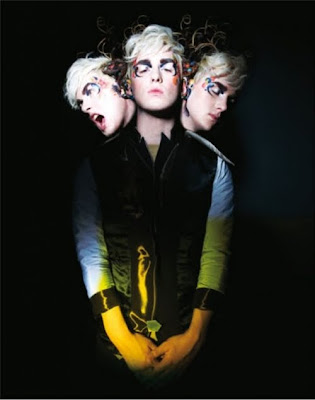 Update - Patrick's tweets on the subject:

Wow.. laughing so hard at that footage heart attack hilton just posted. That bitter queen should have seen me in my maison crimineaux days!

and one in German, roughly translated:

am an animal. I have not forgotten my place in nature as opposed to other people. I do not regret my conduct.

Patrick Wolf, appearing at a German festival Thursday night, became seriously agitated when he was told to end his set early. He refused, so they cut his mics. And then the fireworks began. First, watch this:

Fireworks is too kind a word - he threw everything he could grab at the person in the wings, including a piano bench. Originally, Pitchfork was confused that the woman you see (stage right) was the one he was aiming for. She's not - I think that is his (bandmate) sister Jo. It is someone offstage, presumably a woman (his use of "bitch") but we don't know.

What's important here is that this is not the first time this has happened. Patrick threw a drumstand at his stoned drummer a few years back, and he has a history of encounters with police. In one case, he disturbed other Madonna fans at a London show and then was questioned by police after he spit at a bouncer in San Francisco in early June.

While Patrick demands respect for his stage show, he does not afford that respect to other artists. Hence his stage invasion of an outdoor performance by Status Quo last year:

Amusing sure - the band didn't seem too upset - but also silly and attention-seeking.

In interviews, Patrick is kind, funny and intelligent, as he was when I saw his live show here in DC in 2007. I had hoped he'd outgrow the impulsive temper that led him to "quit" performing a few years back, but it should be noted that while Patrick has always had an excuse for his behavior, he never (or rarely) apologizes. He says he's found peace in domesticity with his boyfriend, but the level of anger he exhibits is quickdraw and violent. While he's truly a brilliant musician, he has a toxic combination of entitlement and bad temper.

Patrick hasn't issued a statement yet, but I suspect that - at the time - he viewed his tirade as a protection of his paying audience. It was the opposite. He encouraged them to start a "riot" which, had they complied, would have left audience members injured. Stupid fuck. Had I been in that audience, I would have been horrified to watch my "icon" come unglued. It was a selfish act and, if not curbed, one day that behavior is going to get him jailed or hurt. A friend of mine rolled her eyes and called him a combination of Ryan Adams, Courtney Love and Philippine-Airport-Bjork. Unluckily for him, forgiveness often only chases the famous.

Hmmm. I don't really know what happened to cause him to lose control so quickly, but I feel a bit guilty speaking as someone who personally sold three copies of his new album to recent Patrick converts at work today. I assume that he would not, as someone who loves letting people know when he is being persecuted, want to pass the same anger and hatred on to others in ways that do not match the offenses. Was he being physically brutalized? There is very little that could validate this kind of behavior, no matter how you felt about the length of your show.

there is no excuse at all for this man's behaviour...regardless of if he is a singer or not. the reason it is inappropriate is because he is a HUMAN BEING.

i think the reason he feels entitled to throw things (what is he...4 years old?) is because people treat him (and most pop musicians) like he's a god for whom no other laws apply.

nobody loves music more than me; i work in the industry and manage a recording artist. they are ALL just people, and they should be held accountable to EVERY rule of humanity.

anyone working for him is spinless.

The Status Quo clip is new to me and very like something that would turn up in a freaky dream. Status bloody Quo being invaded by Patrick bleeding Wolf???? Doing a Christmas song that uses the same tune as all their other songs for the last 30 years? Blimey.

Awful awful behaviour on the recent clip though. No excuse.

His petulant attitude at previous gigs already put me off going to see him play live again, but this marks a new low. Terrible.

Count, S'okay, I don't think we're at boycott level yet. :) The album is good (if a bit bloated) and SALES are good too!

17 Days, he's not really my icon, but when you're at a show, you're often there because you really love the artist. As for his associates - not sure. I did not review him for the magazine this year. Suffice it to say that I blog (and do the mag work) because it is fun and when it's not fun, I fuck off and do something that is.

Dan - Status Quo is such a Brit thing. Not a huge history here!

Oh dear. Not knowing what went on in terms of the agreements and arrangements for the length of Mr. Wolf's set, it does appear that your comment about entitlement rings very true. It's a real shame to watch someone with a lot of talent and creativity behave in such puerile ways. It's quite depressing watching someone creating their own career cul-de-sac or ghetto. Anyway, where's that new Bananarama single? Now there are pop artists who make people happy, stay true to what they do and don't have mardy's on stage.

Agreed about the early-to-boycott stage, but he's gotta realize that everything he does now will be captured by video and sent en masse over the internet. Surely he is not so naive as to think people will not see this around the world, and while it gets people talking, it is not in a positive way. Either he has an inflated sense of importance or he needs counseling. This is the type of thing Craig from the Vines used to do, and he was eventually diagnosed with a medical condition, as it proved to be a temporary career setback.

Yes, from the video it appeared he was throwing the equipment at her (http://www.facebook.com/photo.php?pid=55576&l=121137372b&id=513646622) didn't it? It must be hard going from "the next big thing to Mika", modeling for Burberry, touring with Amy Winehouse, to losing a lot of it so quickly. I do feel bad for him and hope he comes out of it all on-top. It would be such a waste of talent otherwise:(

God don't feel bad for him Will!! People have high expectations in life and sometimes things don't go their way. It's no reason to act the way he acts and there is no excuse for it. Whoever he was throwing the stuff at could have been seriously hurt and then who would we be feeling sorry for?! I was hoping to be promoted to director this year and instead the company is bought out and i'm likely to be out of a job. I won't be throwing my chair or spitting water at anyone though!!

I like quite simple pop and music and often have to have a likeability in an artist, so i've always been wary of Patrick Wolf despite his obvious talents...

I am disappointed a lot. Can I act like a douche?

Mommies cannot lose their shit. Unless they are Courtney and Britney and Whitney. Anyone with a NEY on the end.