Mariah: Now why you wanna go and do dat?

I like talent, intelligence, sexiness and heart. It's not too much to ask our pop stars to be transcendent.

That’s what I twittered to Talia a few hours ago. 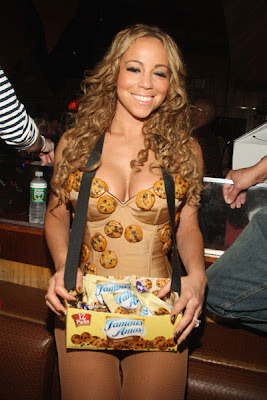 I was musing earlier tonight about Mariah Carey’s hideous new song Obsessed (hear it) and it’s oh-so-classy single cover. The tune lacks a tune, except for the copious use of AUTOtune, which instantly dates it. The lyrics are a trainwreck of awfulness (perhaps in a good way?) and it reminds me that Mariah has fallen into the same abyss as her non-sister Janet Jackson. That of a 40 year woman adrift in the music business, trying in vain to recapture the Hot that has been stolen by younger girl singer rather than reclaiming what made them superstars in the first case. A few years back Mariah had a massive hit with a perfect song, We Belong Together. What made it stick were the great melody, lyrics and actual singing. It was everything we wanted from Mariah.

Janet Jackson Got Till It’s Gone:

Janet’s artistic zenith. This song is intelligent as they come, exposing a generation to Joni Mitchell, pop radio to Q-Tip (Janet: "What's the next song?" Q-Tip"The one about me.") and exposing MTV viewers to South Africa's underground culture during apartheid. It's based on photographs and artwork of the era - look out for the final shot, which many miss ("Europeans only"). Look for Q-Tip in the awesome geek glasses, with Janet herslef beautiful and makeup free. This is as far from the tragic Jackson curse as she could get.

I could have chosen a more "pop" song, like my beloved Dreamlover, but this track is the chrysalis – there’s a pun in there- of the Mariah we suffer through today. Except good. The video is so absurd it was skewered by Sandra Bernhard in one of her off Broadway shows. At the time, Mariah denied it was Tommy Mottola she was transparently fleeing in the clip. Right.
Posted by xolondon

the new mariah single makes me want the new whitney songs even worse than I did before...

It doesn't really go anywhere and when it takes a stop briefly, it's such a trainwreck I can't help but... like it?

It's terrible in the most sensational ways.

I agree what you've said about Janet and Mariah though, moreso Janet, I think, being a little bit lost.

It's really hideous watching Mariah rape that one trick pony over and over again, by now the horsy is already dead... turned into beating a dead horse...

Janet was always very sexual in her songs, IMO you can even see a movement and experimenting with different sounds (even somewhat on 20YO). I'm glad janet is actually working on her new album, and has jimmy and terry back on her team...

I just can't understand why they didnt brand Mariah as a FLOP again, her sales are down her tracks are... hideous...

Most of the so called artists out there on the radio today or all copy cats...they do not have there own style... so if there hot than... the women like JANET that there coping made them hot... wow how can everyone not see the copy catting thats going on with these today artist...compared to the yesterday real artists. 'Strange'

For me, I have always felt like Mariah has never lived up to the promise of her debut album. Emotions is ultimately a huge disappointment to me, although I didn't really feel that way at the time. Looking back, I tried to like it more than I actually did.

She has had some good individual songs over the years, but as far as albums go, nothing touches her debut.

That having been said, her strongest album in years was that E=MC2 album. *shrug*

I recently came accross your blog and have been reading along. I thought I would leave my first comment. I dont know what to say except that I have enjoyed reading. Nice blog. I will keep visiting this blog very often.