Depeche Mode: When the body speaks... 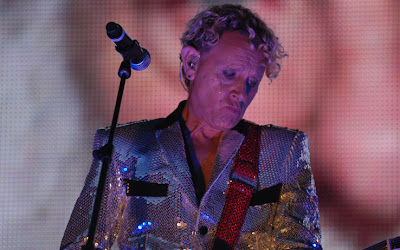 It sayeth to fair-skinned people: Stay out of the sun!

Truth is, it's a bad photo. Martin, who turns 48 in a month, does not always look so lined - it's the lighting and facial expression.

Question: Having lived with it for a few months, what are your thoughts on their new album Sounds Of The Universe? Please comment!

Here is a nicer new pic of Martin, so I don't feel guilty later... 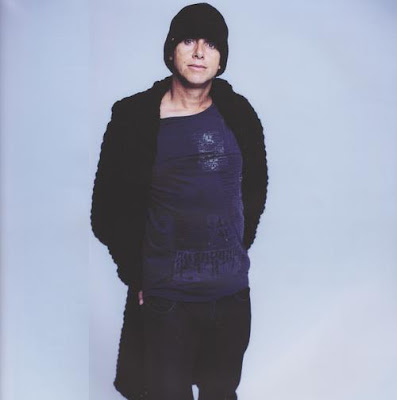 I think the album is a grower... When I first got it, I gave it a solid "meh".... but it's pretty good. I think the single "Wrong" is pretty brilliant (especially the video).

I like the album too--not their best, but pretty solid. What's missing is an absence of slam-dunk singles. And Hold to Feed still rubs me the wrong way. I can appreciate their use of the classic synths, but maybe a new producer next time could tease out some less-sludgy textures. Great songs--Wrong, In Sympathy, Corrupt, Peace, Perfect, Fragile Tension. Not fond of--the way Dave oversings Miles Away coupled with the rather average lyrics.

I've found myself playing SOTU more than the last couple of their albums. I love it. And the blag about no catchy songs/singles is a crock - I think there are plenty of catchy songs on it!

"Wrong" is a great song with that really loud analog bass sound. I can never get enough of that. Especially used in an agressive way. "peace" uses almost the same sounds but in a softer way. The rest I thought were growing on me, but I find I skip them when they show up on my "shuffle."

Throughtout the rest of the album I find that some songs have stronger verses where the choruses are weak and vise versa. "Hole to Feed" is an example. Strong verse, weak chorus. IMO.

The stand-out track for me is "Peace". The synth lines are lovely in this.

I still have to give the album a good listen, though. I put "Peace" on a compilation disk of sorts, so that song has only really had a good spin.

I do like the version of "Master & Servant" by Nouvelle Vague (with Martin Gore on vox duties as well)!

I don't have time to read this, but I'll just say that Madonna's actually looking really good here!

And played SOU like 15 times the week it came out in late April, and then never again. In the end, I only really liked "Peace," and now I could give or take that one, even.

And I listen to the stay out of the sun bit. Am beyond pale.

Keep waiting for the album to grow on me and so far nothing. I miss the single that might draw in someone who isn't already a DM fan and the qualities that made me love their first decade of albums.

Very. disappointed. with. this. album.

I'll chime in now and say nothing has changed from when I reviewed it. Like U2, it's not an album I seem to want to play. Unlike Moz, which is pretty much a bad album, this and U2 are just not so eventful for me. I do like Wrong much more now than I used to, and the experience of getting the SOTU box set was epic.