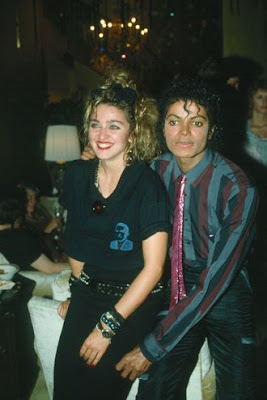 Madonna and Michael during the Victory Tour, summer 1984

In no order, my Top Songs for the second quarter of 2009. I still put on just one song by each artist (this quarter Florence and The Machine would have overtaken the list!). The colored link will take you to a place you can hear/see the song.

we share some artists but no songs :( I think the gossip will probably feature quite high on my album chart at the end of the year, but i really haven't listened to as much as my enjoyment of it should reflect (if that makes sense). Paolo's album - well i liked it first few listens and am now quite disappointed with it :( His haircut is decent though.

La Roux is having a great blog week around "As If By Magic" aren't they? Great stuff here, and as always, excellent recommendations.

I wrote a long-ish comment and then Internet Explorer went mad :-(

Let's just say you provide me with lots of good recommendations!

Other than the absence of Filthy Dukes' "Messages" and Cicada's "Love Don't Come Easy", I agree with your list. Wish I liked Passion Pit's vocals more though...great music.

PS Still getting used to Cicada. It has not hit me like it has other people. Once again, I am The Outsider.

What about "The Girl and the Robot" by Royksopp? I have been playing nonstop since it was released.

I love it when you post these lists; I always go back and "rediscover" stuff!!! I have to say, your initial suggestion of Gossip's Pop Goes The World was sooooo dead on, and I cannot stop listening to it! I LOVE THEM!

Miike Snow's "Silvia" is my clear favourite for 2009, so good choice!! I also think Fred Falke turned in some magic on a few tunes this year or the likes of Grizzly Bear, Gossip, Roy Davis Jnr & Sneaky Sound System...so maybe Freddie is my favourite remixer of the year...