Mixtape: Turn into gold in the sunlight 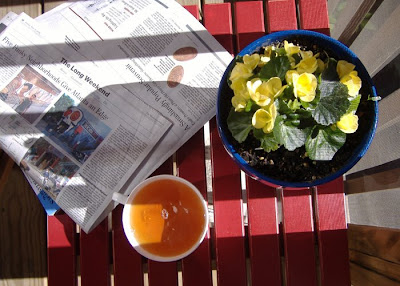 I am back from my mini-break staycation thingy. That photo above is from happier times [Friday morning], looking at my tea and newspaper. Hot stuff. I got massive amounts of shizz done, including the magical erasing of all the grey in my hair - at least for 6 weeks. So sexy, but not as sexy as...

I find it seriously exploitative that the Jonas Bros are expected to speak about purity rings, much less wear them. People (inadvertently?) treat teens with such disrespect.

Poster Girl has me intrigued (scroll to the end of post) by the superb new Fibes! Oh Fibes! video. What the fuck does that name mean?

Scandal alert: INXS' new album will have different singers: Vincent Frank, Brandon Flowers and Gabriella Climi among them. Better than some shmoe who won a TV contest, I say.

Still don't like the makeshift new Dragonette song, but the video is great. Where is a Fred Falke or Van She remix?

We have a new TV show coming on in America that reeks of Paul/Fizzy Pop. It's called Glee and it's produced by Ryan Murphy, who does the ballsy Nip Tuck. See a preview.

Watch a live piano performance of Frankmusik's Olivia, a track that apparently no longer concludes his forthcoming album. Maybe the real Olivia threatened to sue his ass?

Lucky Soul is finishing up their new album in London. I suspect they're yanking our chain when they say it's called Lucky Soul's Hoxton Electro Party Vol. 2. If Whoa Billy is not on your iPod, it should be!

The new Prefab Sprout album has a dorky title: Let's Change The World With Music. Sounds like a Michael Jackson show. It's out September 7.

Annie Lennox aging with no trickery. A toast to honesty (scroll down): http://bit.ly/3u3tF

Florence & The Machines' album cover - it's called Lungs - is brilliant. And her new single Rabbit Heart is unlike anything out there right now. 8-1 has the MP3 of Rabbit Heart - not sure if it's HQ or a Youtube rip.

I agree with Torr that the Jarvis Cocker album is a right load of shit. I much prefer the circa '95 fey Jarvis to the inscrutable, moved-to-France-'09 Jarvis. Freebie: A perfect Pulp EP.

The BBC noted wot I did too: that Paolo Nutini's vocals seem more affected on his new album, as if he is a crooner from the 50's.

Microfilm spawned a monster, or at least a cover of one of Morrissey's lesser known singles, November Spawned A Monster. It's now all twilight strings / electro. Get it at The Music Slut. They also an upcoming track with Sarah Nixey (le sigh) and an EP with a brill title: International Velvet.

Finally, is it just me or does the plucky new Theoretical Girl track, Rivals, sound a lot like Dubstar? Download it on iTunes, including US!

Where is a Fred Falke or Van She remix?The Don Diablo mix is rather brilliant, unless you've heard it already and hated it in which case I retract the suggestion.

Martina Sorbara NEEDS TO EAT! She looks even worse than La Bex in the video of "Catch You".

Thanks for the Microfilm shout out!! xox

Yes, the Jarv album is awful. But the last track on it "You're in My Eyes (discosong)" is actually good, a return to the Pulp sound. If he only did an album of THAT instead of bad garage rock.

And thanks to Glee, I have Journey's "Don't Stop Believing" in my head. Couldn't it have been another one of the Journey songs, one of the less overplayed ones?

Good old Annie. She puts all those contemporaries of hers, and those a lot younger, to absolute shame.

you are absolutely right. i adore Glee. It's a mix of Spectacular, Nip/Tuck and the grossly underrated Popular. Brilliant.

Beware Paul, the last half of Paolo's album is yokel music. Not my thing at all.

My friend has been a massive fan of hers for a while and is always telling me about her gigs.

RE: The next INXS album. The person producing it is, I think, a pretty special producer too...

Have you heard the F&TM cover of "You've Got The Love"? It's fantastic!

You're right about the Dragonette single too. Don't like the song, or the remixes, but yes; the video is great. I really cooled off on them after seeing them live last year and they looked as if they wanted to be in bed rather than performing. And then DIDN'T do "True Believer." Idiots. A Van She Tech remix would have been interesting, I liked what they did with "I Get Around."

Adem, you tease! WHO is producing INXS?

I am not sure I have the Van She Tech mix of Dragonette. I am still recovering from their Feist mix a few yrs back.