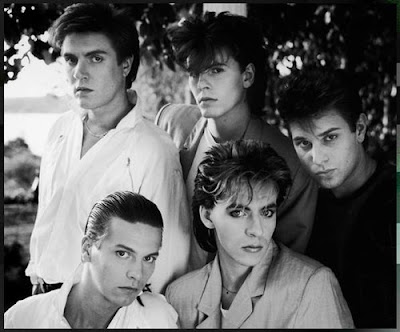 Duran Duran is now on Twitter and you should pay attention for goodies like a new version of Rio they recorded for Mark Ronson. The chorus is "His name is Ronson and he mixes with those hands... oh Ronson, Ronson dance across the Rio Grande." I'm sure it was funny in the studio, but not so much outside.

They're in the studio with Ronson now. Take a look:

Remember on June 29/30, EMI is releasing yet another version of Rio, which is fine because it's an epic pop record. Preparing this post, I found this great website where you can learn everything you ever wanted to know about Rio. There were like 4 versions of the album at the time it was released!

I don't know why I feel inclined to post non-news on Duran so much, but I've never done this...

Update: Maybe New Religion should be on this list. That song has aged quite well for me. I could bump the second song for it.

Meanwhile, The Killers are releasing a "Night Version" of Joyride. A nice nod to Duran.
Posted by xolondon

Any post having to do with Duran Duran is good - newsworthy or not. Love the pic - fabulous!

Aside: the captcha for this comment is FACKFU - sounds a bit rude, eh?

I know you are a married man, but you have to admit they were among the prettiest of bands... They have not aged too badly, esp since we don't have to see the Mick Mars of the group, Andy Taylor.

Save a prayer is one of my favorite songs.

The ones I would add would be New Moon on Monday and Lonely in your Nightmare. And View to a Kill should be there somewhere.

I love the video for New Moon. And yes, I did consider View - came close!

And now I'm on a Duran remix kick! Thanks for the Rio site too. Cool stuff.

"New Moon" would be on mine, and I would actually lean toward including Arcadia's "Election Day" on the list. Would that count?

The Ronson joke wasn't too funny, true, but the clips of them in the studio actually sounded rather liberating in a way. I am now more optimistic! My top 10 plus one:

plus one:
Election Day (Arcadia--c'mon, it should definitely count--Grace Jones is on this track!)

I was tossing around New Moon, Save a Prayer, Lonely in Your Nightmare, and Electric Barbarella as well, not to mention Notorious, Rio, Is There Something I Should Know, and the disco version of My Own Way.

XO--I had a feeling Michael... would be on your list! I am also very partial to Out of My Mind from the same album--like a Come Undone part 2! Too many to choose!

@XO "I know you are a married man, but you have to admit they were among the prettiest of bands..."

Absolutely. I am a HUGE fan. I bought the 7" of 'Planet Earth' the day it came out and have never looked back. I always thought they were a fine looking bunch of fellas. JT is the man, and I love Nick Rhodes' pout-y lips to death.

Aside: captcha for this comment is mullet which several of the boys are rockin' in that photo...

i just bought Rio on vinyl for the first time and yeah, some of the mixes are totally long and different, crazy!

p.s.
kudos for having Liberty's "Serious" make your list!

I got into Serious after seeing them do it on Unplugged. It is CRIMINAL that they don't have a DVD/CD combo for that performance.