Adam may not have won American Idol... 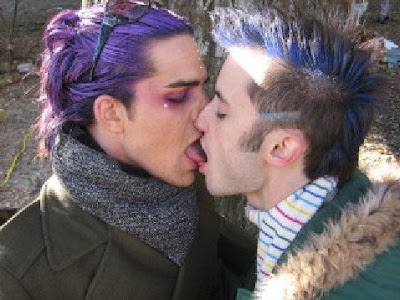 but we did get to witness this rock'n'roll kiss.

and now Adam can go off and do what he wants. He should write with Ole from The Ark

The Ark One Of Us Is Gonna Die Young:

Email ThisBlogThis!Share to TwitterShare to FacebookShare to Pinterest
Labels: Idol

Absolutely - i wanted Kris to win because a) i'm a bit shallow and think he's pretty and b) he needed the win more than Adam. Adam is better off without the constraints of a winners contract. Hopefully now he will soar on his own.

But, I am pretty sure he'll be okay and be better doing his own thing.

What kills me about Adam Lambert is that guyliner is now in our vernacular. For so many reasons. Pick which you like best.

How was Cyndi? I can deal with reading all about it, but I'm not going to youtube her. Let me down gently if she sang Time After Time with her dulcimer though..

I like the guy Adam is baby-penguin-feeding there. I wonder what the percentages were.

Also, the show seems to enjoy bringing back just about anyone these days anyway.

She sang Time After Time with her dulcimer.

Seriously. You can see it at Chartrigger NOW! I love her always.

Yep on the random old men coming back. Rod Stewart looked like he could barely walk to the mic. And the Queen guy, still with THAT hair.

I was wrong with my bulcimer pessimism - that duet was every bit as tender as hearing it for the first time. They could have been left alone doing that all night.

Did I miss something? Who are the people in this photograph?

Count, the boy on the left w/purple hair is Adam Lambert, who did not win American Idol.

Is his friend anybody noteworthy, or was this put out there just in time to make sure he wouldn't get votes from conservatives? (I don't really know the intricacies, as I did not follow this season at all.)

No, it's nobody, and no, I do not think it was put out to ward off votes. It was out out to titillate. I do not subscribe to a theory that a vote for Kris was an anti-gay vote. Some people don't like screechy vocals. That said, America sort of blew it. Could have been far worse.