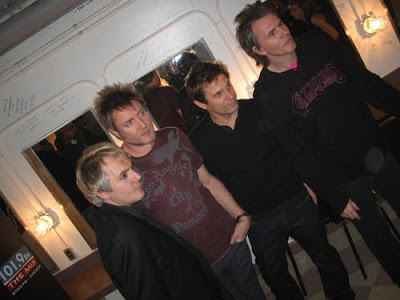 Duran Duran's John Taylor has blogged last week about the recording of their new album with Mark Ronson producing. At the end of the post, he could not resist a dig against Justin Timberlake and Timbaland:

Mark seems intent on delivering the DD album the fans have wanted for years. One that has the drive and freshness of the first few albums, that is quintessentially hip, without sacrificing any of the hard-earned personality and character of the musicians, something which sadly was lost when Timbaland and Timberlake were in the house. So Mark has me playing, and Roger playing, and Nick playing, hotter and harder than we have in years.

Stay tuned for the statement where John says, "You took that the wrong way!" I actually really like Red Carpet Massacre (hear it at LastFM). I just think it was marketed poorly. Wrong single and too much emphasis on the producers rather than the band. Let's hope they learn from that and don't overdo the Ronson Ronson Ronson chatter. Mark is similar to Timbaland in that he is associated with a very specific sound that seems quite un-Duran. Here is a pic of them in the studio. All will be revealed, all will be revealed.

While we await that album, EMI is re-releasing The White Album of my own youth, a 2-disc edition of Rio in June.

John Taylor I Do What I Do To Have You:

"Is my body heat the right intensity?"
Posted by xolondon

Ya know, as much as I hate RCM this is pretty rich coming from John Taylor now, considering they spent about 2 years sucking the Timbaland cock.

Rio special-edition looks quite good! Glad they put a bunch of demos on there.

This is total bullshit though:

yeah right, like anyone still "programmes" their cd player? (or even still owns a cd player.)

And if they were gonna release another old live album they should have made it the 1981 show that I have a bootleg of. It's a great show where they play b-side like "To The Shore", "Late Bar", "Khanada", "Faster Than Light", and "Fame".

Torr, you had John Taylor pics in your locker at school, admit it. [actually that was more likely Morten Harket...]

I actually do like the John Taylor track, but I loved everything DD at that point in my life. "Arena" was some kind of religious experience for me in my early teens. But way to go John for trying to lay the blame on Timbaland and Timberlake.

I like Nite Runner and Skin Divers! Anyway, I am trying to think how old I was when Arena came out. I would guess that I was a sophomore in HS maybe?

Unfortunately having been born in 1980 I was too young to have had Duran pix in my locker. I'm so young I got into Duran around the time of the Wedding Album!

I liked those two tracks he's trashing, too.

They haven't been great since "Come Undone"/the Wedding Album in my opinion.

I cannot wait for the 2 cd RIO set. I am still obsessed with Duran Duran. Red Carpet was great and I agree the marketing was terrible and the single choice was awful.

I also love RCM, and while Falling Down wasn't a great LEAD single, it IS a great song. I think that was a case of the production being a bit plodding and lacking that soaring sound of Ordinary World. I just don't think Justin is accomplished enough as a producer yet. Nite Runner should have been the first single. It would have really caught people off guard similarly to Nelly Furtado's change from I'm Like a Bird to Promiscuous.

My favorite track on RCM was The Valley. That song is TREMENDOUS. John Taylor has some great bass lines and I love the subtle build in Nick's keyboard lines--reminds me of Waiting for the Nightboat! The only tracks I might lose are Dirty Great Monster and the title song. Great visual concept by Nick though. The tour was the BEST I have seen of them, and that is nine times! The electro set was especially cool.

It's kind of irritating to see JT disparaging RCM now--does this band just feel like trashing their previous efforts when they have to justify a relative commercial failure? These guys aren't young anymore, so they just need to embrace the constant progression of their career, and should be happy they sell as many copies and tickets as they do. They never seem to wander TOO far from the quintessential Duran sound.

I love the JT song, even if there is very little of him really on the record. I'd like to hear Torr's bootleg concert though! Bring on the RIO deluxe edition! (It will be the SIXTH time I have bought the album in an updated format).

I forgot how horrific RDM (the song) is. I also like The Valley. I think Nite Runner sounds like Duran Duran, whereas Skin Divers pushes it a bit with Timbaland inserting himself in the way he did on the Madonna record. I also like Tempted and Tricked Out, btw.

I never got the record, but I think they should have pushed the Timbaland-produced tracks as they were actually pretty interesting.

The band would be really stupid to distance themselves from RCM at this point since it's their best album in well over a decade. I second the opinions that they went with the wrong single and then their label botched it up by not releasing anything else. It must have been a costly project so never releasing a second single is just beyond sound thinking particularly when there were a range of good tracks to choose from. Honestly I'm really surprised they weren't just dropped at this point so they are very fortunate to be working with Ronson. Hopefully they will get a musically winning streak going here.

Count me in as someone else who really like RCM. Regardless of what they seem to think, it's just a really enjoyable listen.

Whatever anyone says about Duran, and I wasn't their biggest fan at the height of their success, they haven't ANY need to do a nostalgia tour or recreate their biggest album etc.

I am quietly amazed at how they still manage to be relevant. Of course, they could buy a thousand Mark Ronsons to produce their album, but it's still up to him to agree....

Looking forward to the Rio reissue. A massive album of my youth, for sure.

I'd just like to say thats its a bit late for JT to be bitching about Timbaland and JT ( and i am not bitter because he snubbed me at HMV Sunrise record signing in London either)!!!!. RCM is not their finest moment but they just need to move on. So if the ronson project isn't a commercial success is he going to be doing the same to him in 18 months time?