I can't stay mad at you for too long. That's wrong. 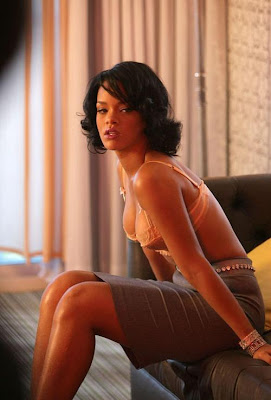 The title of this post is a line from Rihanna's fantastic song Hate That I Love You. Seriously, writers can't make this shit up. My friend Jessica and I had a brief email exchange today when the details of Chris Brown's assault of Rihanna become public knowledge. It's a really violent, dark story. While forgiveness is understandable, I don't know how any person could return to a man (or manchild, as it were) like that. This is not a woman who is financially bound to any man. Why why why? The story overshadows her talent and her music, which leads me to Jessica's point about how Rihanna's return to her attacker could affect her career...

We all know that Rihanna going back to Chris Brown is so not good in so many ways. We can go on and on about "what will we tell our daughters?" and the like. And that is all well and good and relevant. But I wonder if Rihanna has given any thought to the fact that by going back to Chris she has basically run her artistic credibility right into a ditch that she will likely not get out of. I mean, think of the list of things that she can no longer sing about and be taken seriously: being a strong woman, walking out on your man, being independent, the importance of love, or just about any subject that requires having a backbone to talk about. What, stand under your umbrella and get my ass whooped? I think not.

What do you think?
Posted by xolondon

Email ThisBlogThis!Share to TwitterShare to FacebookShare to Pinterest
Labels: Rihanna

I think that any person who is capable of hitting someone isn't a person I want around. This kind of behavior can't be controlled easily. Allowing feelings to come up into such a form of violence isn't something that can be fixed by saying "I'll never do it again".

Yes, it's one thing to forgive, but "one time" for something like this is one time too many.

The world doesn't need another Tina Turner story. This guy has rage in him. I really fear for her life.

I agree- and she told the police this was not the first time. What I said about forgiveness - what I mean is, sometimes it is easier to just forgive someone you have loved, but that does not mean you should be with them. There is a point at which following one's heart is the worst possible move. Anyway, sometimes you see people who do leave but still have such hurt and rage that they direct it inward.

Oh. This is too heavy for a pop blog isn't it? She needs to leave his ass so we can move on!

This saddens and angers me at the same time, and shows just how immature these young celebrities are. People thought Hilary Clinton was crazy for not leaving her cheating husband, who was the leader of the free world, but he never hit the first lady (that we know of). This is FAR worse, and Brown's career will likely never recover, not that I care. And you're right about Rihanna too--how can we ever accept what she sings about anymore without criticism?

Did Bobby Brown ever treat Whitney like this? What is the world coming to? Disgusting.

Bobby just fed Whitters drugs which he bought with her diva icon cash!

My roommate's comment was "To be 19 and that famous with that munch money is a bad mix. Unless you're, like, Dakota Fanning." But remember the cautionary tale of Haley Joel Osment!

What was HJ Osment doing, banging crackwhores in public restrooms? I always thought he was OK...

Smokin' doobies and crashin' cars, Cali style. It was sweet little Tevin Campbell who was trying to smoke something else in a gay garden...

both of them will suffer irreparable damage to their career's if she takes him back.

Great points being brought up here. I think it will hurt her credibility on those "in your face" (no pun intended) songs. However, she's still a victim and it was reported. I think we still don't know the half of what happened. I do know that I already do not like CB anymore. Ri-Ri, I want desperately to move on (sans CB) and get back to the music.

The full extent of what happened has not been reported yet. Nor has it been confirmed they're totally back together.

Right, like that's ever stopped D'luv before!! I'm really, really disappointed in Chris Brown. What a monster he must be inside, and what demons he must harbor. If he goes to jail, he'll get a taste of what it's like to be on the other end of the violence.

I'm more disappointed in her taking him back, if it indeed is true.

Fucked up world. They're just kids. And I'm annoyed that he got the best single of 2008 ranking on Chart Rigger in December.

I assume you did not mean that really- more disappointed in HER? She has her own illness going on, clearly. Jessica also made the point that we tend to berate women in these situations, but we don't have any clue how their minds are twisted by this (they think they deserve it). Each of them has some big problems.

i do agree, but it is always good to believe in the positive side of humanity that people can change and become better people.

i personally don't agree with her decision, but hey, it's her life, she's an adult and if she had a faulty sense of judgement, she just might not be where she is today in terms of her stature.

one thing is for sure though. all eyes are on her more than ever. a strong, independent woman can forgive and maybe make a positive change on someone they love. maybe that will work in her favour? i don't know.

To clarify, I'm disappointed in her if she indeed got back together with him. I'm not berating her as a woman at all in that statement. If she beat the shit out him—it happens!—I'd be disappointed if he took her back.

If it all went down that night as it appears, I hope Rihanna stays far away from Chris Brown.

And you're right, each of them do have their own problems....#1 being they're KIDS with millions of dollars at their disposal, living in a bubble with no sense of how to act, how to treat people in the real world. Clearly.

What is really sad is that we're all so familiar with this kind of story. Maybe she won't leave him now, but eventually she will.

It is hard to let go of someone when you have an emotional attachment. Even when you know the relationship is bad, it can be hard to walk away. All of this has to do with self-worth. They are kids. They need time.

well I think the point is that you cannot change someone else. they have to want to change. and this is part of the sickness.. it is like a "perfect storm" if you will, of someone with low self-esteem (rihanna) who probably DOES feel she can "save" him, and then a man with serious rage issues.

listen, very few people who are abusers do not actually regret what they have done later. they are just powerless to stop themselves in the moment.

he will beat her ass again, that is one thing we can all count on.