Black Room kiss you in the light of day 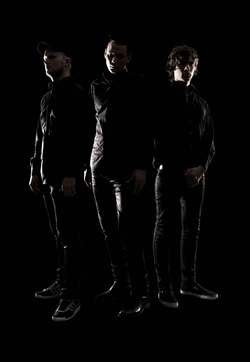 In one of most poignantly unceremonious album releases I can recall, Lorraine /Black Room launched their long-awaited - 3 years! - album Pop Noir today on iTunes.

1 I Feel It (moodier new mix)
2 When I Return To The World
3 Saved
4 Tell It All
5 She Lives In Gardens
6 Beyond The Sky
7 A Life Less Ordinary
8 Heaven (P Furs cover)
9 A Million Colors
10 The Mess That We Are
11 Imagine This + hidden track (a 3-min synth/sax piece, Never Give You Up)
12 Italian Girlfriend

Doesn't the hidden track usually go on the very end? Whatever. I am thrilled by the inclusion of the last song, the moody Italian Girlfriend, which is like a lost track from side 2 of Duran's Rio. But where is their masterpiece Transatlantic Flight? Too pop and not enough noir? Where is Tell Me Where You Wanna Go? Beautiful Thing? Touch Me? And all the new songs I'd hoped they were recording in the last 3 years since I found them via PopJustice?

Despite all my mixed emotions about Lorraine / Black Room, there are some fine, fine pop tunes on this album. It's solidly great. In a perfect world, they would have been able to release this via a proper label with proper financing. Those days are gone, so buy the album on itunes and give them a bit of the $ they deserve. And one last note...

Tell It All is one of the most exhilarating, emotional pop songs of this decade.
Posted by xolondon

This album sounds pretty good, if not a bit on the safe side. While there are some nice tunes and the production is fine, they might need to do more to get people to take note. Seems a bit like the last Delays record without the continual sense of euphoria. That being said, it's much better than that Snow Patrol filler.

Guess they are destined to not get a physical release?

There is a physical release but only in japan apparently.
The album was released here yesterday following a rather decent promotional campaign in Tower Records stores (Flyers and posters were displayed)

They will be playing live at club quattro in tokyo next month.

I remember this. I heard some of those songs when I was younger and loved them! :-)

But I wanna CD!