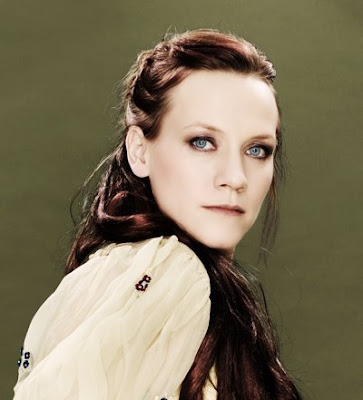 Drecker: Looking like she's fresh off the stage from an Ibsen play

The vertebrae of the stunning new Röyksopp album Junior is formed by three tracks with vocals by the Norwegian singer Anneli Drecker. It's been two years since I last wrote about her, but you can get her bio via Wikipedia (trust it?), but the highlights are that she started singing in 1985 with Bel Canto and has since done 2 solo albums: 200o's Tundra and 2005's Frolic. Until recently, her music was not easy to find, but is now available on itunes in many countries (US / UK) . Röyksopp should bring her back into the spotlight.

The new Röyksopp songs are cinematic in scope - huge melodic songs with massive synths, orchestras and layers of Drecker's vocals woven in and layered on top of the music. The most pure pop accomplishment is Vision One, which has the best lyrics on the record, a statement on man's retrograde ambition of willful obsolescence. One line leaps out: "It's too late to think that we can worship human emotions / Cause we've already evolved into machines in our minds." The music is ethereal, but grounded by a belching synthesizer that contrasts with the delicateness of Anneli's voice. One of the songs of the year no doubt in my mind.

You Don't Have A Clue, about loving a man who's unaware of how entangled he's become in a relationship, is built on a piano line that skips along. I love how she sings "You're hiding from yourself, yes you are, yes you are" as her voice climbs the scales. The third song, True To Life, is almost polyrhythmic. The edgiest of the three tunes (and the longest at 5:50), it sounds like it was created through a series of absinthe-fueled jams.

Now that Bjork has disappeared into an esoteric planet of inaccessibility, Anneli Drecker has really taken her place as the proverbial human voice in the machine. She's already has garnered much respect and, I suspect, prefers a life in which she can slip in and out of the garden gate of pop music.

You Don't Have To Change
Her most accessible single, from Frolic. In every way you are, you don't have to change.
Who On Earth
For a child, this song is notable for a dramatic showstopper moment in which sings "Am I a concubine?"
Tundra
Like Bjork on Homogenic: martial electronica juxtaposed with soft synths and orchestrals. Even better for the fact it's song in Norwegian.
Rainstorm
6-minute masterpiece starting as a folk tune and evolving at minute 4 into a literal orchestral storm. Her voice is pleasingly double tracked with a male vocal. Rainstorm sounds like it cost a hundred grand, so many musicians play on it.
Turn The Lights Down (with a-ha)
Lovely lowkey duet with Morten Harket from their Lifelines album. More musically "organic" than most of Anneli's own work.
My Emily
She wrote this soft, elegant ballad for Morten Harket.
It's All Here
Bass, acoustic guitar and keyboard. Shimmery. It's all here in my heart.
All I Know
Very Sarah Brightman, this sounds like a movie theme.

...and the three new Röyksopp tunes instantly hit the top. Each a diamond!

What songs did I miss? I know there are some Anneli fans out there...

I hope somebody likes this post. It took me days and then I had f*ckloads of coding problems with it. It was done in the spirit of love... with a lot of cursing!

You know I appreciated it..

I still can't find the words to properly review the album. <3

I think it was you who got me onto La Drecker... I LOVE the Royksopp album and her contribution is absolutely integral. It would have been a very different album if Robyn had done most of them - although hers is great too.

I was going to say I loved What Else is There by Royksopp and her until I found out it was Karin Dreijer (The Knife). ha!

But All I know, It's All Here and You don't have to change are my firm faves...

This album, for me, is like when Groove Armada stepped up with Soundboy Rock and every track was a winner.

As a fan of Anneli and Bel Canto since '96, I nearly peed my pants when I saw your post this morning! Very well put together. I urge you to check out Tierre Obletz, a classical masterpiece she did with Bel Canto (never officially released, but often performed live) - one can truly appreciate the powers of her voice after hearing that. Also, the earlier Bel Canto stuff is very synth-y and dark, something fans of Depeche Mode might enjoy. Another gem is a cover of "Morning Glory", which was done with Simon Raymonde (Cocteau Twins) on a tribute album to Jeff Buckley. And then there's the more recent "Birthday Remix" of "My Emily" by Lost Memories now available on iTunes - something new to hold us over until a new release (which may come this year, by the sounds of it ;) )

A very well put-together overview--it's hard to believe now that her records go back about 20 years!

My favorite Anneli related song was and always will be "Unicorn"--the first song on the first Bel Canto album, Shimmering, Warm & Bright. It may have been a little of its time, but the first time I heard it, my reaction was about how incredible her voice was accompanied by the atmospheric music, with echoes of the Cocteau Twins and early Clan of Xymox. You must hear it in full if you never have--it is now a diamond of a distant past.

I enjoyed it too (and love the Röyksopp album), but wot no 'Safe now' in your Top 10? That's my favourite Anneli number...

Another album I have to buy!

i posted lyrics for Vision One on my video. Don't know if they are right... it's my best guess!

When I read your blog that time I enjoyed this. I like the video now I want to collect more song of Anneli Drecker . Can you give me more information on these songs?