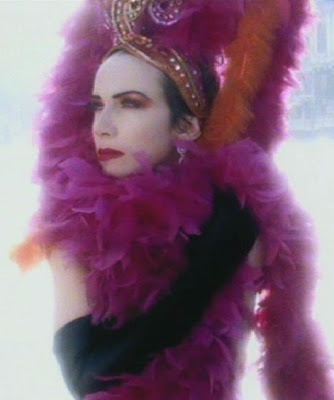 Annie Lennox is a force of nature. She is at the vanguard of artists who represent the great gift of 80's pop: the marriage of electronic music with a soul voice. Greatest hits CDs are generally not worth the (virtual) ink. However, for geeked out obsessives, these collections are ripe territory for debate. The Annie Lennox Collection, a CD/DVD combo, was finally released this week. While impressed with the overall package, I felt it worthy of a few comments.

It's great to have high quality masters of the older tunes like Why, but at 14 songs, the disc is a bit meager. A Whiter Shade Of Pale was neither a hit in the US [it was big in Romania sayeth my friend Alex] nor is it one of her compositions. I'd dump it for another track and steal Ev'ry Time We Say Goodbye from the bonus disc. Of the two new songs, her cover of Ash's Shining Light is the best, a churning radio-friendly track notable for its bright use of the word "firmament." Weaker is the meandering Keane track, Pattern Of My Life, which should have either been produced by Tim Rice Oxley (it wasn't) or been replaced by fiery new disco-gospel rave-up.

UK buyers have a 2-CD option Americans do not: a bonus disc of 8 rarities. Truth is, Annie's solo output has a lot more than 8 rarities. That disc is missing some prime tracks, like her cover of Psych Furs' Heaven and Step By Step, a 1992 tune later covered by Whitney Houston. It does add one of Annie's most vital obscurities, a collaboration with Herbie Hancock called Hush Hush Hush that is wrenchingly pretty.

The accompanying DVD is evidence that Annie is second only to Madonna in status as a video icon. She goes from stunningly beautiful (see Precious) to scarily arch (Little Bird), often in the same shot. Ev'ry Time W Say Goodbye, one of her finest videos is not included, perhaps because it was done for charity (though the song does appear on the bonuses). More videos could have been included from her Diva video LP, including my favorite, Money Can't Buy It, and Legend In My Living Room. Most disturbing is the weakness of later videos. The 2003 tour clips included for Pavement Cracks and A Thousand Beautiful Things are not worthy of official release, they are shot so poorly, the latter flipping between overexposed and murky.

The packaging is beautiful, with some amazing old shots and an iconic new cover portrait by Bryan Adams - yes, that Bryan Adams.

The most recent cover tune Annie recorded, included on the bonus editions, is apt. It's a note-perfect live version of Jimmy Cliff's melancholy Many Rivers To Cross. The lyric emotionally sums up the mood of Annie's most plangent songs over the years: "Many rivers to cross / and it's only my will that keeps me alive... This loneliness won't leave me alone / It's such a drag to be on your own / Love has left me and I don't know the reason why / Well, I guess I'll have to cry."

Annie Lennox sings for and to those like her, locked inside their own heads and their own vast dreamworlds. 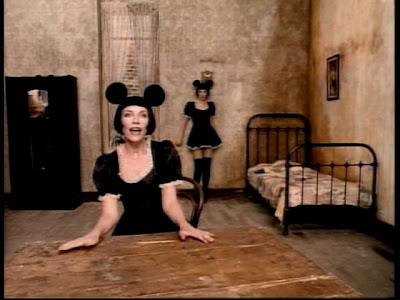 For the Lennox Trainspotters, my version* of her Hits set:

Completists should note that Till Bronner released, in late 2008, a duet between Annie and Milton Nascimento on Misterios.

While collections like this have their place, it kind of feels like Sting's career separate from the Police, or Phil Collins from Genesis. They are so integrated with each other, you can't help but feel you are missing half of the essential tracks. I would have been happier with a remastered and expanded version of Diva with its video album. Now THAT is essential listening.

As much as I love Annie & respect Herbie Hancock, I much prefer the original version of Hush, Hush, Hush by Paula Cole featuring Peter Gabriel. Shows how underrated Paula can be as a musician as well.

I still think they missed the boat back when the Eurythmics albums were remastered by not reissing the Savage video album.

That having been said, the videos they included were solid. She, like Madonna, seems less interested in making videos now than she used to be.

I suspect the labels don't want to front the money or the artists worry that they won't earn it back. Axl Rose said that his label discouraged him from doing a video recently and then WalMart (or whoever it was - Best Buy) said THEY expected one.

ever since you won me over to Coldplay's album with your amalgamated LP/EP track listing, i've longed for your version of albums - i'm going to hunt down the Annie rarities and give that a go. i've already put together her XO greatest hits for my mp3 player this morning.

Here's hoping Will Young has a video collection and rarities cd (though i'm not really sure what rarities he has) with his hits collection later this year...

As I'm listening to Annie to remind myself of what ones I liked.

I stand by many of your choices. Particularly "Ev'ry We Say Goodbye," "Little Bird" and so forth. And since you have her cover of the Clash song "Train in Vain" I am okay with that. And also the "Put a Little Love in Your Heart."

Though I would include the song "Primitive" from Diva in the songs, too.

"Little Bird" is one of those songs I always think I'll do if I ever do karaoke; that of Blondie's "Heart of Glass"

Here's another thing - I think "Shining Light" is one of the hookiest songs so far this year, but it has such an odd structure. It kind of has no chorus - the "full on chemical reaction" part is probably the chorus but it feels more bridge-y. Of course, the actual bridge is the "these are the days we often say/there's nothing that we cannot do."

I'm sucha sucker for chronological best-ofs, I almost cringe when theyre not arranged that way. I love listening to the development of an artist through the years.

To echo the above sentiment, since a lion's share of this best of is from Diva I wish that they would have just re-issed a remastered doubel disc Diva. Every song on that disc is perfection.

PS--did they ever reisuue a remastered Savage? My fave Eury. album

I was too lazy in my cut and paste to do a chrono order for my versions. I totally agree about Diva - I think that would be really marketable.

Savage, yes! There is a remaster. I bought the whole set in 2005

I haven't seen the clip for A Thousand Beautiful Things yet, but I would have included the unplugged version that was on the Bare Bonus dvd, it is utterly gorgeous.