Quote of the Week: PopJustice on Girls next single 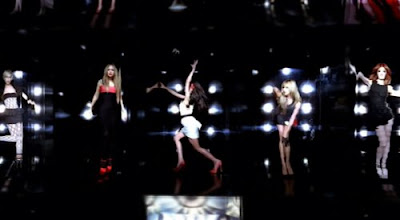 PopJustice, on the potential for Untouchable to be announced as the next Girls Aloud single.

At almost seven minutes 'Untouchable' is Girls Aloud's 'Stairway To Heaven'*, their 'Bohemian Rhapsody'*. It must exist in its entirety, or not at all.

Meanwhile, at the Brits, Bono said he wanted to be in Girls Aloud, to which Adam Clayton replied "Which one?" Bada bing!

Meanwhile, at the Brits, Lady BlahBlah, who reportedly had a massive entourage, did not know who Girls Aloud were. Pop fan, eh eh?

ugh to the gaga.

while i do adore untouchable, i think i've played that to death now, although a single and video might revitalise that for me. Bring on rolling back the rivers...

Am I right in thinking GaGa is the new Geri Halliwell / That Orange Bint From Liberty X in that she has a 'showbiz age'? She did not look very young when dressed up as a half eaten chocolate bar with the marvellous Pet Shop Boys.

I am actually surprised Gaga didn't know who Girls Aloud were. But hey, she DID know who Van She were when I saw her in concert last year!

To be honest, if it wasn't for the occasional airing of a British chart show or the like on American cable, NO ONE IN THE USA would know who Girls Aloud are. I think Gary Numan has more US fans than Girls Aloud.

Gaga barely know who Kylie Minogue was in an interview once. Don't expect much :p