Mixtape: Tell me the truth, is it love or just Paris? 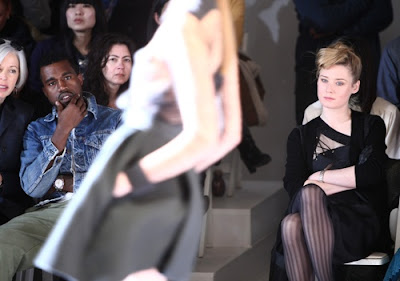 Roisin Murphy may not have the elevated place she deserves in pop music, but she's clearly high up the guest list in the fashion world, seated next to self-promoter Kanye West on the front row of the New York shows. This photo's from The Hopeless Optimist, who has elaborate coverage of Roisin's fashionista jaunts worldwide. I hope this will inspire her to create new music soon.

Chers amis, Phoenix, a band I completely forgot existed, is back. Their website opens with a free download of new single 1901. The song seems like standard indiepop until the chorus where the real hook comes in-n-n-n. If you don't know their 2003 track Too Young (watch it now), used to great effect in the film Lost In Translation, get it on itunes. I should add that they're French and we need more French popstars, at least beyond Mrs. Sarkozy. Their new CD, the brilliantly Wolfgang Amadeus Phoenix, is out May 25.

The Virgins want to be as effortlessly cool as Phoenix. They're in fashion spreads in New York (see it) and Rolling Stone. I recommend the track Private Affair.

Neko Case's new album The Middle Cyclone is streaming now on NPR! It's out March 3.

U2. What does one say about hoary ol' U2? I think their new album will require some time. The question is, do I want to give Boner and The Boys that time? I am still baffled by the choice of that boots song as the single, when Stand Up Comedy or I'll Go Crazy If I Don't Go Crazy Tonight completes the task with far more effervescence. I just did a killer review of it for Instinct, which I'll share when I can.

Morrissey fans: I was at first dismissive of the new b-sides, but I'm slowly changing my mind. I recommend both Because Of My Poor Education and Shame Is The Name heartily. I doubt anyone noticed the little slogan on the banner above - that's taken from Shame. I plan to review the actual album soon. The song to beat is the wailing, intense It's Not Your Birthday Anymore. The Red Radio has a contest up for a free vinyl copy of the album (Americanos only).

Seriously, OMD and Spandau Ballet are recording again. The latter are sort of like Take That with erectile dysfunction.

That defamer Chartrigger is now in love with Lily Allen after years of refusal (!). I hope the pic below of Lily and a large pussy pops his cork.

Stuart Price has remixed Wrong by Depeche Mode. This one as Thin White Duke. Should be good, though his recent Starsailor mix added nothing much to Tell Me It's Not Over.

Ladyhawke has new mixes out for her Paris Is Burning track I love the Funkagenda mix and the radio edit for the Simmons and Christopher Mix. They're all over the place.

Does anyone have an MP3 of Will Young's iTunes UK bonus track This Is Who I Am (hear it)? I didn't know it existed until today. It's a massive attack... 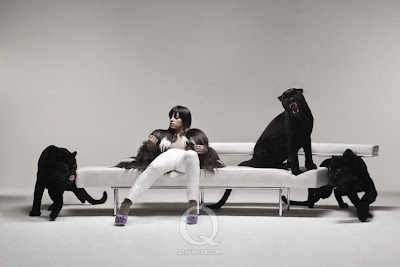 U2 are not worth the time to try and get into an album anymore. I've been playing these three great old(er) songs of theirs lately:

P.s.
The Virgins are far better than Phoenix have ever been. "Teen Lovers" is a great track.

WOT!? Is that a joke Torr? Your U2 comment is akin to praising Ganglord, Public Image and Life Is A Pigsty and saying the new stuff sucks in comparison!

You are wrong about Phoenix too! Wrong-o. You are on crack tonight.

I like Because Of My Poor Education quite a bit, but Shame Is The Name should've been an album track. It's excellent.

I love OMD so I'm glad they are coming back.

I never seem to be impressed with Stuart Price remixes, although he's a good producer. The Viva La Vida one he did was dull.

i'm thrilled OMD are coming back. long may they reign. I don't have that Will YOung track as iTunes is the enemy, but i will have a scoot around.

I like Public Image Limited, if that's who you're referring to.

I didn't realize until recently that Spandau Ballet was named after a place in Germany, though it makes sense.

I think this new Lily album has made a fan out of many non-fans. Arjan felt the same about the album too. I once read a review which said that "Lily Allen is like Marmite. You will either love it or hate it."

I couldn't agree more since I used to hate Marmite but after giving it time to absorb, I now find that a slice of toast with melted Emmenthal over a think layer of Marmite is absolutely the most exquisite thing ever!

I'm not joking at all. Those three I named are great U2 songs from the not too distant past.

And yes, "Ganglord" is way better than anything from the new Moz album.

I like the Lily album but I was bored of it after a few days.

I agree with Torr in that "Electrical Storm" was U2's last good song.

Thanks for posting the picture of Lily. Maul her, pussies....MAUL HER!!!!

Still loving the album. But now that it's out, we don't need her around anymore.

That's like a variation on "I want to bang you but I don't want to hear your voice" - you want to hear Lily sing, but that's it. Mean bitch you are. She is like a kid sister!

Electrical Storm is not THE shit, but it isn't shit. I don't care for than Hands Across American song though...

The video for Electrical Storm was sexy.

U2's songs since Electrical Storm may not be as good in some eyes, but you cannot deny that they sold a crapload of records with Atom Bomb--Vertigo was huge.

Personally, I preferred the Achtung-Zooropa-Pop era that many did not like (at least those with money who buy albums), so I am a bit excited to see if they can be less like U2 again.

OMD are performing a concert this summer with the Liverpool orchestra, I think one of their old albums; it seems kind of like the PSB Battleship Potemkin thing. Sounds cool. They totally need a critical reassessment and praise; a very underrated band.

U2; yes, Electrical Storm was one of their last great singles; then after that, they picked up their guitars again and it was all over. Ugh, maybe it's a macho thing? Too many synths and they think their manhood's in danger.

Moz=Shame is the Name is good, a hell of a lot better than 95% of that album. Utterly disappointed in the Morrissey record. I don't understand how 90% of critics are praising this record so highly. I don't get it. It's hands down the worst album he's ever done.

Lily Allen=I dont get it. Explain her to me.

If you do manage to get your hands on that Will Young track, would you be a dear and send it my way? I would be EVER so grateful :)

I loved the Stuart Price (aka Jacques Lu Cont) remix of Depeche's "A Pain That I'm Used To," so I'm looking forward to him taking on "Wrong."

Lily Allen's CD is one of my favorite album of this year so far. "Everyone's At It" is the modern-day version of "Mother's Little Helper" or "White Rabbit."

And finally, you are a winner of the Premios Darbo Blog Award, this blog is always an interesting rad when it comes to music!