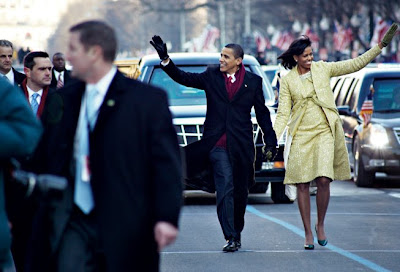 That photo has nothing to do with pop music. I just want to see it on this blog. Right now, it appears that it's truly raining shit in America. I don't ever remember a period this fearful, at least in a way that affects our daily lives. So the picture above, to me, symbolizes one of the only bright lights in our lives. A lot of people I know have had a very bad - or at least rollercoaster - week. They have my support and love.

Rose Elinor Dougall, ex Rosay of The Pipettes is streaming a woody new folk-based song on her myspace. May Holiday. Her album is looking to be one of the wonders of 2009. Her voice is so evocative of the 60's folk.

"I know all about the sphincter." A sentence uttered by Nina Persson (Cardigans, A Camp) in The Independent. I was wrong, by the way, about a new Cardigans CD in 2009. Unlikely.

I see The Killers are already planning a covers album. I suggest they talk to Duran Duran about what happened when they followed The Wedding Album with Thank You.

Oasis' new single Falling Down is their best single in 14 years (!) since their imperial moment. By far.

Tori Amos may be playing SXSW in Austin. Her album is due in 2 months and no one has any idea what it's called. ? Epic is also rumored to be releasing "Best Of" live release from her American Doll Posse tour.

Jem is attempting to resuscitate her DOA 2008 album, Down To Earth. It was shit then and it's shit now. The only good song is the fluttery On Top Of The World.

Did Morrissey's nude pic last week signal his sad decline? Maybe. I found it quite droll and it did get a lot of attention.

Much bettah is the Welsh band Torr turned me onto, The Joy Formidable. It's crunchy but also really melodic. Lead singer's name is Ritzy.

New Divine Comedy album out in last half of 2009. Official.

PopJustice has a sample of the new Simmons and Christopher remix of Paris Is Burning. Sounds BEYOND.

Lady BlahBlah (thanx, Paul) - her Eh Eh song sounds like a massive hit to me, but let's just say she has a face for radio and leave it at that. AND SHE IS NOT 22! Puleez.

The genius Lucky Soul have been recording their new album for quite awhile. Here is what Ali looks like in the studio. She is deluxe. More on Lucky Soul.

In 1998, Joni Mitchell released one of her finest songs, Stay In Touch. The lyrics are words to live by. Here is a bit from the end of the song:

I haven't been able to generate much enthusiasm for Little Boots. Meddle and Stuck On Repeat are catchy enough, but they aren't exceptional in anyway.

What a shame about the Jem...I know somebody who swears by it, but I cannot seem to find myself warming to it anytime soon. Being the Welsh Dido apparently doesn't mean much when nobody remembers Dido either. Her album has some moments of quiet bliss, but most people who I've seen come across it didn't even know she had released anything recently. Pity.

I think the Killers should really be focused on the now and not how they will sabotage themselves in the future. Duran's album wasn't a complete disaster, but 911 is a Joke was pretty dire. Just because you like someone doesn't mean you are equipped to do their songs.

Pitchfork gave the Morrissey a great review, but sound upset about Lily Allen pushing the ska aside.

Following up the Wedding Album with Thank You is the perfect analogy. The Killers already have one compilation, doing a covers album at this point in their career would be completely stupid.

Ignore Pitchfork always, whether it's positive or negative reviews, I NEVER agree with them.

p.s.
my Word Verification on this comment is "strap", hehe

Oh, and I love the idea of Nina Persson knocking on doors in Cleveland to get people to vote for Obama!

"she and her American-born husband (and bandmate) Nathan Larson were dispatched to the neighbourhoods of east Cleveland to help motivate an electorate that had never before voted into making a difference this time. "We were going door to door asking people to vote for Obama," she says. "I'd tell them all about the good work he was doing, but that because I was Swedish I wasn't able to vote myself. However, they were, and I insisted that they should."

It has been a rollercoaster week so far. It's as if the cosmos is just dropping bombs in the middle of lives like they're newspapers being tossed on a front lawn.

I think I know the singer you're talking about. While I won't argue that there are serious similarities, I wouldn't go as far as grand theft career. Now, if he records an album paying homage to someone like Ethel Merman live, then he's got some serious 'splainin' to do.

The GaGa video...stylish and kinda fun, but dental work should be a requirement.

Gaga 22!!! Whatever luv! I mean that's freaking insane isn't it?

Little Boots - i really like Meddle but i am getting bored of her very quickly which isn't good. She may be one of my flash in the pan acts which i get a bit embarrassed by. Not as bad as Billiam of course, but i'm hoping for a stunning album to lure me back in.

Was over Jem months ago - noticed she was hawking her album on tv again. Shame. I loved her debut.

Think i've picked up on that rufus rip off. I've developed a bit of a thing for him lately, belatedly it must be said so am enjoying discovering his back catalogue past Judy tributes! Any recommendations?

Count & Torr, there were indeed some songs I liked on Duran's Thank You. I think that album killed the momentum they'd built with such a huge comeback. Killers are too new to start covering other acts!

Everybody should read the Nina interview - she is NOT dull.

Paul, Your Billiam love is now legendary. Regarding Rufus, the must have album is Want I. That and Poses.

You know I love that Joni song - it is just a perfect song in so many ways. And a perfect way to end this post.

As I understand it the Duran covers album was recorded before the wedding album and rejected by their record company who agreed to finally release after their comeback.
I think The Killers have just gotten to the point after doing months of interviews that they are starting to make things up to keep from being bored. Clearly they need to stay miles away from a covers album.

Count me amongst the rollercoaster weeks!

No Killers covers album, please!! They should do a videos compilation DVD instead.

The thing Gaga needs to learn is that she just needs to have those sunglasses on at all times. Otherwise, we're confronted with that face.

In the words of Valerie Cherish, "I don't want to see that."