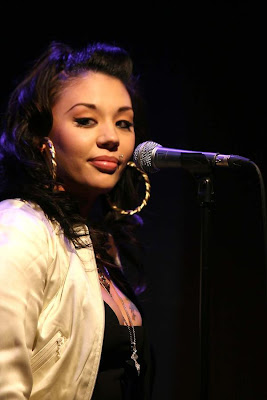 I was crazy to love her, but I've reconnected my mind. Needless to say, I am shocked to find out that Mutya Buena - the EX- Mrs. XO, My Beloved Mutya - has entered the Celebrity Big Brother House with the likes of LaToya Jackson and Minifucking Me. Really? Who manages her? Has she lost her record deal? Could it not have been that celebrity jungle thing where you at least get to see them have moments of small triumph after eating a bug?

You'll remember - or, conversely, you won't - that I had great hopes for Mutya when she left Sugababes. This girl is one of the best singers of our generation. Unique, emotional, beautiful. But the sad fact must be acknowledged here and now: Mutya is a chav! A chola girl! There, I found the strength to finally say it. On her myspace page (find it yourself), she declares "My passion is music!" Really? Seems to me, Buena, from the "personal" photos displayed on the site, you most enjoy hangin' in da club. Where is your baby? Where is your band?

We all know now that her debut album, Real Girl, was a flaming turd, bar like 4 great songs.* And now this travesty. She is sure to cause drama in the house. Catfights and spotlights. Best case scenario, she's not the flaming bitch we suspect she is. I have little hope: this is the kind of girl who constantly demands respect while never earning it. Let me be wrong.

Mutya, it was great while it lasted, but you need to stomp your totally mint condition [cough] tattooed thighs back to the chippie in Kingsbury, or wherever it is you "hang." I'll take my whiskey sour and play Ace Reject and the beautiful, sad Maya (for your sister) over and over. Now the conversation's over and there's nothing more to say. I had time with you, so hear me now: I won't stay. It's my turn to walk away! 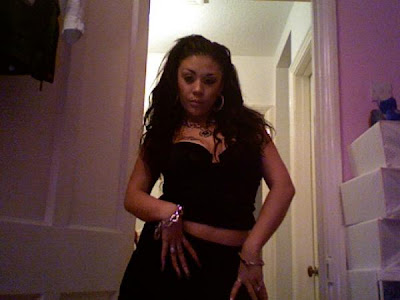 * Real Girl, Song 4 Mutya, the lovely It's Not Easy, Strung Out

you're kidding me right.. to me everything you wrote in this article seems just plain silly, i wont even bother proving you wrong because if there's one thing i've learned - it's that mutya is the type of person people choose to hate on no matter what, and it seems that few are the people who can appreciate her for the amazing person that she is.

personally the most offensive thing about this is the hideous dress she wore to enter the house...

Why all the fuss over someone who was a pop puppet for a bit and always looks bored?

Puppet or not, the girl can sing.

Song 4 Mutya was one of my favorite singles of whatever year it came out. Sad to see her on the decline.

While I personally agree with what you say, it should be noted that CBB is not *necessarily* the kiss of death for a music career. It could be argued that Mark Owen's winning of the thing back whenever it was, was the catalyst for the Take That comeback...

You know, I sorta had the same reaction when I saw her go in the house, but after watching a few episodes now, it's kinda fun to seer her converse with Ben Adams of A1 and Michelle Heaton of Liberty X about 'celebrityville' and pop music. I don't think it's a mistake for her to do go on the show. It will give her a bit more identity in the public eye.

I love that comment at the beginning about not being able to criticize Mutya's decisions. Blind devotion is so quaint.

Oh, you know what, she'll do OK out of it, but whether or not it will help with the singing career is another matter.

Big Brother, celebrity or civilian is over - past it's sell by date. So most people won't even notice she's gone in.

I'm not disagreeing that she has a voice, just that she doesn't really have anything to offer me.

The Groove Armada track is brilliant of course.

Hopefully someone will slap this up on youtube so we can see her inhouse banter here in the US. I can't wait!

LIBERTY X BROKE UP? When did THAT happen and WHERE was I?

every true star must hit rockbottom at some point and if doing trashtv is mutya's rockbottom, she doesn't have much to be ashamed of. times are tough! it's not as if the sugababes are doing that much better :p

Oh, how disheartening! She was my fave Sugababe til she left, as I felt her solo record was only half good. ::Sigh:: Poor thing.