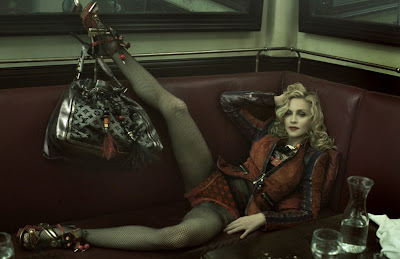 More Hard Mandy and her not-so-warm lil oven. I don't like this image - it's like she's trying so hard to taunt us. I do, however, like the pic that highlights her chicken cutlet cheekbones.

Zavvi, the UK record chain, is dead. Will one store remain next Christmastime and, if so, will that store flourish due to the lack of brick-and-mortar competition? SHOP LOCALLY IN 2009! I have been recently, when possible, at the lone DC record store, Melody, and will continue to pay a bit more so I have that option. I am, well, freaked by the death of music stores, but thankful for the online communities of music geeks we have today.

Speaking of the industry, Tori Amos is talking and saying she refused to sign a 360 deal because it basically gave over too much control to others. She will take shorter tours in the future because her daughter is in elementary school and she does not want to disrupt her life. Take that, Madonna.

Torr is most unhappy with the new Morrissey album. I am still processing what I've heard, but I love the song that has the line "It's not your birthday anymore /There's no need to be kind to you."* Also recommend the single I'm Throwing My Arms Around Paris, which sounds to me like a Bona Drag song and that is a good thing. It won't set your world on fire, but it's pleasing. But Torr! Torr's love has died - will Morrissey win it back?

*Update: That song It's Not Your Birthday Anymore is MAJOR. The vocals are better than any he has done in years.

For the darklings who dig a heavy singer/songwriter, check out Karima Francis. It's true that she sounds like Joan Armatrading, except more... warbly. Joan Armatrading meets Snow Patrol?

The new Bruce Springsteen song, Life Itself, is beautiful and sad. Watch it. Yes, you read that correctly. For the past few years, Bruce has been doing more melodic songs with complex arrangements. More importantly, he seems to be dropping the faux country twang he had taken to using. The man is from the Jersey shore! You can get the song for free on Amazon.

Did you know Paddy Boom (aka The Straight One) officially left Scissor Sisters? I just found out. Damned homos chased him out. joke

Week after week, day in, day out, Frankmusik delivers genius pop to myspazz. This time it's Questionable Times. So I am bit perplexed to find that his forthcoming single is Better Off As Two, a b-side from his current single. It's not a bad song, but I'm not sure it's the devastating breakthrough he needs. Side note, I finally got his EP in the mail and the packaging is so deluxe that it worries me how much money was spent on that launch. Prudence, Vincent!

A Camp's new album is called Colonia, which sounds too much like "colonic." The debut single, Stronger Than Jesus, left me a wee bit cold. Remember, this is the side project of Cardigans singer Nina Perrson and her husband, Nathan Larsson. See the video now.

RuPaul has the good taste to read PopMuse.

Tracey Thorn is done with her album. It's not a "beats" record, but more acoustic (like half of Out Of The Woods), though her band does consist of members of Hot Chip. I have no fears - she's sublime and actually has integrity. No word yet on titles or when it's out.

The Time has recorded a new album with all the original members. Seriously. Will it be good? Baby, if the Kid can't make you come, nobody can.

Sheryl Crow turned down Fleetwood Mac, NOT the reverse, says Stevie Nicks. So THERE, Lindsey.

I love Q's Track Of The Day.

Poor Boy George. The live review in The Times perfectly captures that sad cloud that lingers over him. I hope he can pull it all together again. I should add that there appear to be errors in the piece. Vote For Love? Is that Yes We Can?

Don't you think the powers that be are using Alexandra Burke to recreate the success of Leona Lewis? We only need so many baby Whitneys.

I enjoyed reading Kitty Empire subtly swipe Duffy in the Observer as an "M&S version of soul." Note that Adele, who was trashed by many, I think, for not being a blond sexything, has raked in a load of Grammy nominations and is selling quite well in the US. I plan to see her in early 2009.

Oldie Of The Week: Can't stop playing the 5:05 extended mix of Sade's Never As Good As The First Time. Get it here. I like how the male vocalist does this low bum bum bum thing with his voice, like he's part of the rhythm section. Hear it running throughout the video. The 45/12" versions are re-recorded, but if you do not own 1984's Promise, it is truly one of the top 20 albums of the 1980's. It never ages.

The next time you read one of these mixtapes (if you want to, that is) Barack Obama will have taken office as the new President. Now, Barack has already made a few confounding decisions, but I am letting that stuff go and hoping he can restore America to the place it belongs, as a GOOD neighbor in the world. Viva Barack. Viva Michelle. Viva Morrissey too.

BTW, what happened to Nina Persson's solo album that was supposed to be electronic pop? Here she is working with hubby on earnest folk-rock again. I thought the first A Camp had a few good songs, but the new song is a bit drab except for her vocals, which ARE great. It's just so...American.

Can this really pay the bills?

Where do I start? You know I'm with you on the record store front. Time to make a stop at Twist and Shout. Good for Tori, although I don't know if we've seen the full potential of the 360. Madonna's kind of a control freak, so it would be interesting to see what she likes that Tori doesn't about those deals.

Ana is straight, too, isn't she? And ANYONE who reads PopMuse has good taste. Excited for Tracey, not excited for The Time. Yay for Sade, boo for Alexandra. X-Factor has become such a manufactured mess that I wonder when they will jump the shark. Maybe "Ave Maria" will be their winner's song next year. That'll leave 'em sobbing in the aisles!

Congrats on your #19 rating on Wikio. Bravo, sir!

Downloaded the Morrissey record from...."somewhere"; ugh, errr Moz! At first run through its a bland mess. He needs a new producer, new bandmates/co-writers. There's no progression. I wasnt even a big fan of Ringleader but that's miles above this. He needs to do more ballads, acoustic songs, different instruments. The guitar rock thing has been done to death by him.

Morrissey has no choice but to get a new producer.

Hey, can someone get my Ford Range Rover out of Madonna? It drove up her sometime last week and I can't fish it out...