If I'm ugly then so are you 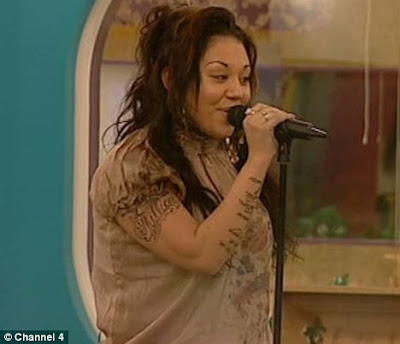 Let me be clear: I'll try to always be fair. I LOVE Mutya Buena's voice and the emotion she seems to effortlessly vocalize. She sings like an old soul. When she does well, I will always leap to praise her. I'm effusive that way. When she lets me down, it's because I hold her to a higher standard. Should her appearance on Big Brother correct an incorrect perception of her, then it will be a wise move.

Along those lines, British Peoples: Do I need amend my Mutya-on-Big-Brother-post and strike the harsh assessment? It drew some strong responses that made me wonder what I don't know about Mutya and how much I'd fallen for some vaporous pop-culture conversation about what kind of woman she is. Please report on how she's doing on the show - wot's she like, anyway? I cannot watch the show, but first word comes from Phil of Worrapolava:

She's not the hard-faced chav everyone paints her to be. I'm sure that her and Keisha together could be vicious when they were younger, but she's a mother and she's seen a lot and achieved a lot. She's very sweet and caring. I like her. She holds herself well in the house and is far more mature than 45 year old father-of-four Coolio. What a knob.

Watch a Big Brother profile on Mutya (yes, it is Moo-tee-uh).

Watch Mutya be lowkey and nice to some chick I don't know. (embedding disabled sorry)

Phil and I exchanged comments on how she looks on the show. This is one of my things about her. If she celebrated her unusual look with a bit more panache and upkeep, she would be the embodiment of the (society-deemed) ugly girl who made herself beautiful by highlighting her quote unquote flaws. Maybe that is actually the wrong thing to say, since the definition of beauty is coming from me, not her. Or maybe if I could really watch her on Big Brother and like her, I would not see this hard, tough creature. I really loved her for singing Ugly. Remember that? I just thought that song was so brilliant and loving, even if I am not a tender teenage girl. Or maybe I am? Hmmm?

Email ThisBlogThis!Share to TwitterShare to FacebookShare to Pinterest
Labels: Mutya

I usually agree with you, mister.. but this one is.. um.. haggard and over? I think maybe she wasn't meant to be a pop star. If she were amazing solo, she would not be doing Trash TV.

Love her voice, but I'm just 'meh' about this.

Glad you caught that John!

She looks like hell (heh) but seems quite normal and nice. They're shown her actually doing stuff in the last 2 days which is nice, but you know how these things are edited... mostly her moaning about Coolio (who is a moronic pig) and smoking. She did some singing and had to worship a Chesney Hawkes shrine for a task.

I am liking Celeb BB this year. Full of freaks!

She's the most likely of the 'washed-up' pop stars in there (Coolio doesn't count, Latoya Jackson seems nice but isn't really a singer is she? , also some orange girl who was in a pop group off the telly made up of people who didn't get picked for another pop group off the telly and a man from a boyband) to have a musical career after appearing in the show, in my opinion.

I don't think this is a career kiss of death for her.

I caught the first ep of Celeb BB, and I was quite surprised at how low key and nice Mutya seemed. I agree that perhaps in her younger days with the 'babes, she may have been vapid. I'm not seeing that now, but then again, it's early in the show. I'm of the opinion that her appearance on the show could change public perception of her. She does seem to be very focused on her daughter, which is a fabulous thing actually.

So Pete Burns is back for another season of Celeb BB, then?