...Sitting in a corner in imperfect clothes, trying not to pose 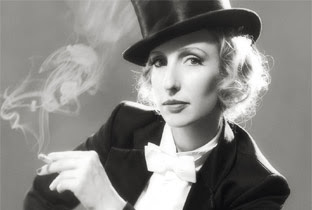 Pet Shop Boys have a new project with their friend, the artist Sam Taylor Wood. I'm In Love With A German Film Star is a sleek Passions cover sung by Taylor-Wood. to be released on October 27. Is it just me or does it sound like her voice has been digitally merged with Neil's? Her phrasing and range are identical!
Sam's done two other tracks with PSB, both covers under the name Kiki Kokova: Je T'aime Moi Non Plus (1999) and Love To Love You Baby (2003). Last year I saw a video Sam shot of a sleeping David Beckham (idea ripped from Warhol) and the promo clip below is even less thrilling. It's a shame, because the song is pretty heavenly.

Normally Sam does not look a movie star: she looks like this.

I love the original song so much that I was a little cautious about anything touching the track. It's okay however, but still not a patch on The Passions.

this cover is so unimaginative it is almost not believable that PSB had anything to do with it. Maybe it was just such a unique song / sound in the first place, it should not have been touched. The video, assuming it is a joke, is about as funny as cancer.