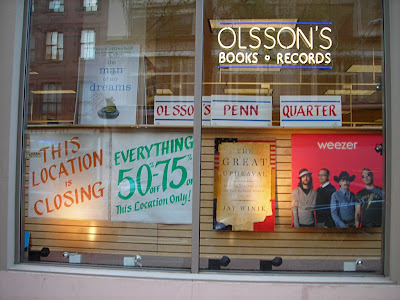 I've been out of blogging action a bit this week because work has busted my chops. I suppose this is a good thing at heart, but I don't like it when work takes so much that I have no energy left. That combined with barely sleeping has left me a haggard tramp! But not so out of it that I can't give some thoughts for this week:

The new Razorlight song is kind of corny. I love the opening when Johnny sings in a very unadorned, subtle way, but then he goes on about how "she lives on Disillusion Road" and I wince. Watch the video here. Is it just me or are music videos for major artists getting weaker and weaker as the industry leaks money? The best videos are coming from artists used to no money.

A friend gave me the Christopher Ciccone book and I cannot put it down. It has a few dishy things no one had mentioned to me or written about, so maybe I'll put them in post. For instance, Chris claims that Seymour Stein (the mogul who discovered Madonna) came onto him in a big way in the 80's, trying to interview Christopher for a job while he (Stein) was wearing nothing but a bathrobe. Seymour even wanted to do the interview in his bedroom. Oy vey... Chris didn't do it. I still would love to interview Christopher - it would be a really good discussion.

Sugababes new b-side Don't Look Back is not terrible, but really slight. Following up on my Jennifer Hudson review, I should say I a bonus track called Stand Up that is starts like a nice 980's ballad and devolves into shrieking. Disappointing.
What happened to the new Bouncey singles? We heard she was coming back, saw the video shoot and then...the lady vanishes.

A certain blogger tells me the Keane record is very good. Oasis doesn't think so. Meanwhile, they have not released a solid album since 1995. Suck it hard, Noel. Regardless, The Times gives Oasis 4 stars. Meanwhile Keane streams their CD in full on LastFM starting Monday the 6th, though it will probably link momentarily.

The October issue of Instinct includes two pieces by me: a quick writeup on Darren Hayes's Live DVD (yes, it's a little late, but Instinct and I like Darren) and my "US review" of Roisin's Overpowered album. I call her erudite in it... I quite like that review.
Rumor has it Chinese Democracy is out on November 25. Does anyone actually think it will be good? The man has been locked in his house since 1991. Time has marched on. Axl Rose is more known for featuring Crazy at this point.

What about a team-up between Missspears and Greg Kurstin? I could deal with that. She is back to looking good.

Public note to Adem: I love your blog and hope next week is glorious for you. Thanks again for pointing me to Ladyhawke. I am still obsessed with it.

The photo accompanying this is of another record store closing. All over the UK and America it keeps getting worse...  sad times.

Did I tell you what horrified me the most about the Ciccone book? His revelation that Madonna hates air conditioning! I was absolutely mortified.

I have faith in the new Sugababes album but not as much as I had in 'Change' last year, which excited me to no end and is still a worthy disc in my player. Hopefully they'll prove me wrong, but this time around I'm more excited about what The Aloud have to offer.

Chinese Democracy coming in November, and apparently Courtney Love's LP coming in January; is it the end of the world as we know it? I still cannot wait for the Courtney album but God, I've had some of these new songs for just under a year now! She better be recording new stuff to go on it...

Thank you for the kind wishes :)

So many independent record stores have closed down over the years in my home city and it's never an easy thing to sit through. There's a really cool record store that reminds me a lot of the one in Empire Records here that has a big FOR LEASE sign out the front of it at the moment. The thought of the last remaining independent (the only place in the city to buy the latest vinyl as well) closing its doors is incredibly depressing. We're now left with two MAJOR chains, and only one of them is really making any money because they offer cheap prices.

I was really crushed when the Tower in Foggy Bottom closed. Tower (in Portland) was my first record store, and I thought the one in DC was pretty decent, especially for imports.

I cannot wait for Keane--everything sounds good! And thanks to XO as well to Adem, as I just picked up the Ladyhawke CD yesterday, and am LOVING it! Modular has to be THE record label of 2008, no?

Speaking as someone who works at one of those "last remaining indie stores", I would be lying if I said everything has been rosy for the last five years. Things have been exceedingly tough, what with fighting mega-chains, downloading, the internet, and the crap-tastic economy, it has been a downward spiral that has seen my store cut to 1/4 of its original size, and my staff cut from 14 to 6.

I think XO hit the nail on the head when mentioning the crappy videos out there now. Many go with the loads of crappy music you have to wade through to find the gems. The convenience of downloading is reaping what it has sown in the form of less great music. Its very sad to think about how many good people I have known who have lost their jobs in the past 5 years, most losing their passion for music in the process.

It doesn't help when AC/DC announces they will be selling their new album exclusively at WalMart, and now Guns n' Roses exclusively at Best Buy. I don't really like either one of these bands (or I would not be reading this blog), but I find this ability to destroy the level playing field simply appalling. Consumers should be able to buy their music wherever they choose, and not be limited to a place simply because the band sold their soul to a corporate vampire (sorry Eagles, that means you too). Its also funny when I get customers like the one I had a couple days ago who commented that we were about the last good place to purchase music around.

Guess I'm sounding like a whiner, but in the past week I have purchased at least 10 CDs from my store. In other words, I'm trying to do my part to keep myself employed, and hopefully give people that option of finding a more obscure disc (like Ladyhawke) at their fingertips. Viva la indie!

Closing down shops make me sad :-(

Sad about Olsson's. Agreed about Melody. It's always been my favorite music shop in DC. If they did online sales, I'd buy something today!