Madonna to Robyn: Fuck off! 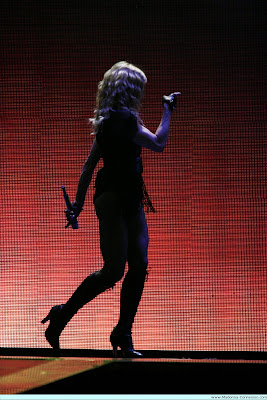 Update: Robyn tells Perez Hilton she did meet Madonna. Not sure why her first interview came out the way it did, but here is her follow-up.

Remember last year when Sophie Ellis Bextor revealed that she had never met George Michael despite being his opening act on tour? Robyn reveals the same nasty truth in a Swedish newspaper interview.

I can't read Swedish, trolls, but Youknowho Hilton has pulled quotes that reveal:

Robyn and her crew were told not to approach Madonna, not to speak to her and not to take pictures. He quotes Robyn as saying, "I hadn't expected any glamour, but it's strange that they assume that the first thing you're gonna do is run after Madonna and ask for an autograph."

My theory? Madonna is threatened by Robyn. She's 20 years younger and just starting to hit her stride. She clearly knows Robyn is good enough to open for her, but she cannot be bothered to thank Robyn once in person for being the first opening act she's had in almost 20 years? Tosh!

I am shocked by this. SHOCKED. Madonna? A cunt? Never.

though really - what did robyn expect? madonna doesn't exactly ooze with the milk of human kindess. At least she is getting some publicity out of it :)

this shocks me, but yet it doesn't shock me. i don't understand the logistics of it all - i suppose robyn travelled separately also even through she was part of the tour? there was no opportunity at all to make contact? it all seems a little unbelievable. now how's that for keep a distance! i have however, met robyn in person and can vouch that she is lovely and approachable. but she does look v. different w/o makeup - maybe madonna just didn't recognize her?? http://www.facebook.com/photo.php?pid=593659&l=0ffbf&id=513646622 ... regardless, robyn will have many bigger things to come and yes, madonna has every right to feel threatened. i agree.

You've met everyone Will! (except me, of course) Anyway, I remember saying in April that I wish the attention/effort placed on Hard Candy had been directed at Robyn's album b/c it is phenomenal. It's never been on a year-end album list of mine because of the whole multiple release dates/versions issue, but it deserves a special award.

Madonna has not produced anything in the past 8 years that as good as With Every Heartbeat, IMO. That song fits into the special place in which Like A Prayer resides.

It's just a simple fact that Madonna can't seem to handle Robyn.

She should have fucking known.

Yeah, I'm not surprised in the slightest. Annoyed, yes, and had hoped Robyn would come back from the experience saying how lovely she was, but deep down I always thought something like this would surface instead.

I 'loled' at the last two comments.

Madonna is as relevant as Oasis anyway.

Ooh I am a bitch tonight.

Boy does make Madonna the new Helen Lawson or what?

I was kind of hoping that Robyn would rip Madge's wig off and try to flush it down the toilet. :-p

I guess I'm on a Valley Of The Dolls kick tonight.

So it turns out your story was wrong.

Thank you - I have updated my post. I comment on what I read in the press - I try not to trust gossip and this *originally* came from authoritative foreign press, so I was not able to even read the quotes. Not sure how Perez translated it or what was left out of the original piece. Robyn is now doing damage control, let's put it that way.