Madonna News and a Sexual Lesson 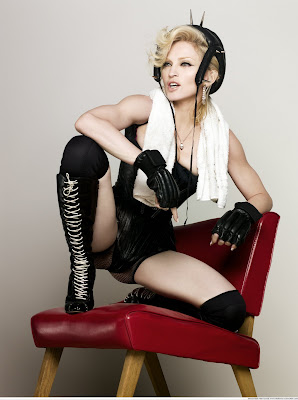 Madonna has released some new photos (by Steven Klein) for the American leg of her Sticky & Sweet Tour. I suppose I am should call these "striking new images," but I prefer the geeked out* one at the bottom of the page. I am sitting out this show, but many of my friends are going and will report back (and I need to ask one of them to get me a tour book!). Here's what I said about her 2005 show at MSG.

She starts her American leg in Jersey on Saturday night, so she's been photographed around Manhattan this week with a suddenly grown David Banda. And he's a bit Kabbalah'dup, isn't he? 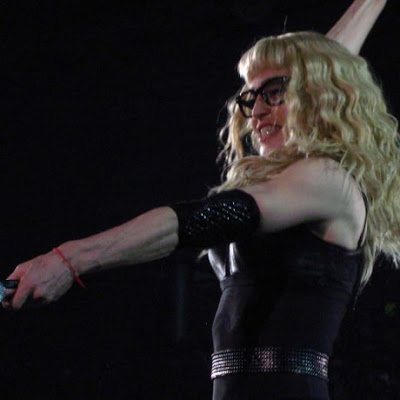 * Did you know that there is a sex term called gooning? Correct me if I am wrong children, but I think it has something to do with going "into the zone" sexually, perhaps in the onanistic way, hmmm?
Posted by xolondon

I'm so excited that the tour is finally hitting the U.S. The show we're going to isn't until the end of October, but the fact that she has made it through the European leg without injuring herself is reassuring! Going to this show is kind of the opposite of the last two shows I saw because I saw them very early in the tour. This experience is much more like Drowned World, but even then it was summer when we saw that. Seeing a Madonna show in the autumn is something I really have to work my head around!

um, as I understood it, gooning is another term for drinking or chugging or slurping... I have heard it in urban slang that way... so yeah I suppose it could be used sexually.