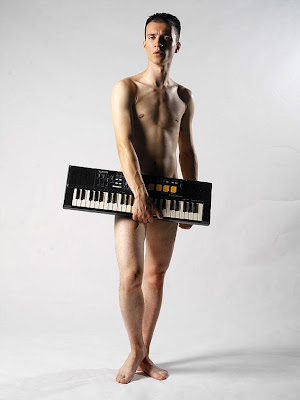 Vince Frank is fit. He is also Frankmusik. 21, from Thornton Heath in Croydon, which means South London. Like Ladyhawke, he transcends indie and pop factions with a song like 3 Little Words (video below). Check out Popjustice's piece on Frankmusik's new music/k produced with the most recent Refugee Of Madonna, the ubiquitous Stuart Price. Frank's full album, Complete Me, is due early next year.

Watch the video - the song is totally kicky and fresh. Be forewarned that your eyes may melt when you see the costume that suburban mall chick on the left is wearing. Straight Outta WalMart, but with less style!

Email ThisBlogThis!Share to TwitterShare to FacebookShare to Pinterest
Labels: Frankmusik

Hmmm, don't know about this. The song is quite manic, no? Not really a patch on Ladyhawke, and I guess people may say he had to get his kit off to get noticed. Stuart Price has done better (the new Killers and a couple Keane tracks for two).

Why can't I get past the lisp? Should I be more lisp tolerant?

Lisp tolerance is required for some great pop artists (see Tracey Thorn and Will Young)!

I was not comparing him to Ladyhawke in terms of quality - this is the only song of his that has stuck with me yet - but in terms of indie cred. He just remixed a Radiohead tune, which was a wise move in terms of his profile being raised.

I am uncertain what I think about him. I think I'd listened to a few tracks on Hype Machine and not been impressed, but this one is catchy.

When is the Will Young review?

Is Stuart Price the new Mark Ronson who was the new Timbaland?!

Now see, I love Tracey Thorn, but don't really get Will Young yet. Maybe I can tolerate women who sing with lisps, but not men. Does that make me lisp-sexist? I think if you are a singer, a lisp can be very distracting. I don't hear that much lisping in Tracey Thorn though--maybe only when she talks? Similarly, there are those who stutter when they talk but don't stutter when they sing (Now that will open up a whole new can of worms).

This must be quite thought provoking, huh?

You say fit, I say emaciated. That boy needs a cheeseburger and fast!