Dubstar: To know these songs and to sing them 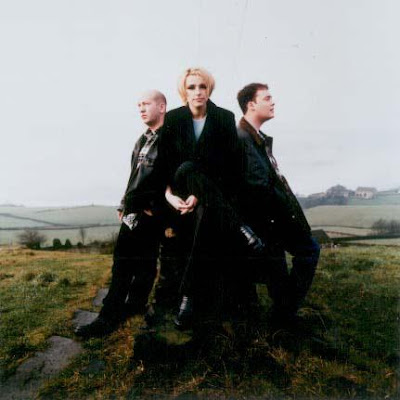 Dubstar have reformed! The trio, featuring lead singer Sarah Blackwood (recently of Client) are recording an album with Stephen Hague. It has the working title of United States Of Being.

Dubstar was a personal favorite of the 90's. The sound is sort of post-PSB electropop. Hugely melodic. Their albums Disgraceful (1995, with a naughty cover image) and Goodbye (1997) are superb. A third record, Make It Better, signaled their end. It was much weaker, but there is a solid Best Of CD available.

If forced to compile a "Top 20 Songs of the 1990's" it would be hard for me to ignore the lush Stars. I first heard it on a CD walkman in a B'nB room in Notting Hill. I must've played it 10 times in a row and it has never worn out. It is, as you'd expect from the title, stately and celestial, sort of like a feminine counterpart to Depeche Mode's glorious Never Let Me Down Again. The kind of tune you want to blast in the car at night.

Captured in amber, The Dubstar Web Garden is a website that is as it was in 1998. I am beyond eager for this album - I'll report when I know more.

Email ThisBlogThis!Share to TwitterShare to FacebookShare to Pinterest
Labels: Dubstar

I remember Dubstar, indeed they were rarely off the CD player in 1995/6 in my second year of college and they triumphantly form the soundtrack to my visits to Cambridge, where my old school friend was at university at the time.

For me, they never quite revisited the greatness of Stars, or Just A Girl She Said, though No More Talk came closest.

I think they were just too sub-Saint Etienne in the end, a band who were themselves hitting their most-commercial stride at the same time. But I can't deny Dubstar were clever with their lyrics and their arrangements.

It will be interesting to hear some new stuff.

I'm so spoiled from listening to the Motiv8 Mix of "Stars" over the years that the original always sounds a bit dull by comparison.

Stephen Hague is also doing songs with Andy Bell (or is it Erasure?), if I'm not mistaken...?

Is Client over then?

I was just going to say something about the Motiv8 mix, too! Love it.

Oh yeah! I made my own Dubstar compilation CD years ago and still play it.

I saw they were back via Facebook Groups, of all places!

Client aren't splitting, in fact there's a bit of tension between the boys in Dubstar and Kate from Client. Sarah's been asked to sign a contract that forbids any promotion of the Dubstar album until the Client 2009 album and tour is finished but I gather that the Dubstar project is steaming ahead regardless...