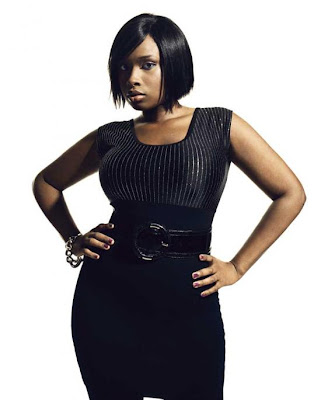 Whenever Jennifer Hudson came onscreen during the '04 season of American Idol, I'd screech, "Mrs. Sears!" (my surname). Her deep voice and the way she projected both self-respect and a rare measure of gravity was a welcome relief from the usual whorish Idol contestants. She listened to advice and modified her performance style as the show progressed. America booting off such a formidable, interesting talent was yet another example of mass stupidity.

We all know the rest of the story: Effie, Oscars, Andre Leon Talley, Carrie Bradshaw's hand-me-downs, etc. Jennifer's solo debut has taken forever and, while not a total disappointment, it does smack of large committees sat around a boardroom thinking about demographics and whatever hit radio potential is left in America.

Jennifer Hudson is evenly mixed with songs suggesting an artist trying to build a long career and a few crass attempts to shoehorn her into current styles. The Ne-Yo written debut single Spotlight ably straddles those two goals. It's about as catchy a tune as you'll hear on radio this year and the lyric is a twist on her own absurd level of fame. But it's not the album's classic. That title's reserved for the unbelievable We Gon' Fight. Like Mary J. Blige's No More Drama, this hair-rising midtempo should take the world by storm once it's performed live. It's a Mercedes of a song. I love it when she sings, "Like gangsters we gon' strap up for this war." The song has a thrilling gospel edge and a hair-raising hook: "I'm gon' fight for you / You're gon' fight for me... that's how it's gonna be." Fierce.

Ne-Yo's second contribution, Can't Stop The Rain, is a great narrative song, just when the record needed one, built on acoustic guitar. Upcoming single If This Isn't Love highlights the dilemma Hudson faced in trying to make an album that would "move units." I'm unclear who wrote the song, but it sounds exactly like every Keri Hilson / MJB track, with syllable-crammed verses that reek of recent r'n'b recordings. It doesn't sound even like Jennifer singing. That said, it's absolutely lush and the extended middle eight is stunning, especially the "I know I ain't crazy" section at 2:30. Gorgeous.

Hudson is liked by just about everyone, so it seems that everyone tried to get a song onto her album. The overrated Robin Thick contributes a repetitive ballad (Giving Myself) that attempts to mine Whitney territory, but just seems trite. Missy Elliott is - surprisingly - more successful, with her "diva showdown" track I'm His Only Woman. It allows Hudson to show some sass: "I don't need no introduction. I am his woman and I am Jennifer Hudson" she snaps. Her voice works well against Fantasia's broken-up, cracklady vocals (I say that with love - I think Fantasia is charming and deserves her own success).

The album's disaster is What's Wrong, with a pandering, obligatory T Pain feature. Painful. This autotuned dreck has nothing to do with Hudson - it could be any shitty singer. If you're going for the usual suspects, why not have her duet with the superior Cee Lo Green?

The dreaded Timbaland contribution, Pocketbook, is actually a kick. The hook "Don't make me hit you wit my pocketbook" is hilarious. Ludacris's rap is painfully explicit at moments ("Before I make you too wet girl..."), though there's a great moment where she cuts him off. I appreciate that Jennifer, so stoic on Idol and in Dreamgirls, wants to show some sass, but Ludacris overdoes it on a song so jaunty that it could have appealed to the granny set.

So where do Mrs. Sears and I end up? I will actually purchase the record. A conglomerate she may be - can a clothing line at Lane Bryant be far behind? - but I'm gon' fight for her.

Click here to listen to Jennifer Hudson.
Posted by xolondon

Not a bad album.

I think it dips pretty badly after Pocketbook and doesn't recover until I'm His Only Woman. I could barely remember listening to the songs between those two.

I'm His Only Woman is a lot of fun, and the concluding songs are strong.

It's a shame that Spotlight seems reluctant to actually enter the Top 40 chart.

I have to say i've been looking forward to and dreading this album in equal measures. I think some of the collaborations sounded dreadful (in theory) and I do not like Fantasia at all. However, I think Jennifer herself is rather lovely and i shall definitely be checking this album out... Nice write up. From what i've heard We Gon Fight is just mammoth.

My friend Thom had a typically cutting comment about We Gon' Fight:

i'm so happy to see that you've reviewed this album, xo. nobody is a bigger j-Hud supporter than i. in fact, i was quite shocked to read that she is also known as mrs. sears because she is known to me as mrs. wong. i suppose i now know how jennifer felt when fantasia confronted her about this alleged love affair in their duet. in a nutshell, i love j-Hud, but do not love this album at all. i am a fan of the more melodic, hook-driven tracks at the beginning of the album. i do like robin thicke (note his wikipedia page which felt it necessary to clarify the pronunciation of "thicke") contribution:p "pocketbook" is cute and only ludacris can get away with the absurd things he raps about. i am a little worried about this album being commercially viable. v. worried.

Both Pocketbook and the Fantasia song made me LOL.

j-Hud quote 2:"jesus promised me a home over there."

gaad! this j-Hud album is like a variety show!!! how do you go from that to THAT in the span of one album?? :p

I've given this a once over, left me a little cold. Planning on going back to it again though after reading your review to compare thoughts...

I am three good listens in, and I am very impressed every time I hear her sing. I don't even mind that she takes you to church in the end... JHud is the real fucking deal.

I agree about the church song - it's her roots, so it's more honest than, you know, hiphop.