Labelle: I ain't the floor you're walkin' on! 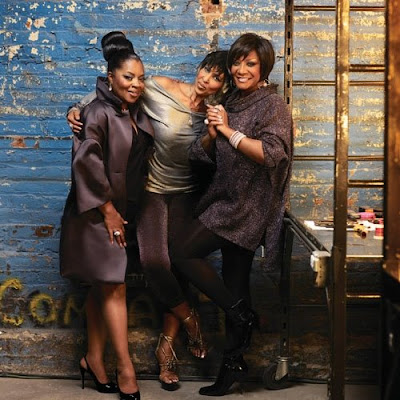 I am going to do the press release thing for one hot moment because this one is worth it. Because those in the NOW understand that God is actually a fierce black woman in 6 inch heels and She has seen fit to reunite Patti Labelle, Nona Hendrix and Sarah Dash as Labelle. The new album, Back To Now, was produced by Wyclef Jean, Lenny Kravitz and Gamble & Huff. It's due out on Verve on October 21st, right around the time Grace Jones sets her Hurricane free. It includes new tracks, at least one (Kravitz-produced System) that was intended for a never-recorded Labelle album in 1977 and two covers: Mother's Finest's Truth Will Set You Free (see the original) and Sylvester's You Make Me Feel Mighty Real (last recorded by Jimmy Somerville).

Some of you who go way back with this blog know that I had an obsession with Miss Patti back in 2005 when she had her TV show Livin' It Up With Patti Labelle. When I first played this new single, I was shocked by the auto-tuned intro, but don't worry, proper singin' takes place. This is a electro arm-waver with a little bit of feel-good gospel...

Email ThisBlogThis!Share to TwitterShare to FacebookShare to Pinterest
Labels: Labelle

Doesn't TVOne air "The PJs"? I wish that show was released on DVD already.

The new single is pretty bad. Was it produced in 1998? Sounds like a Wyclef Jean production. Their 1995 comeback single ("Turn It Up") was so much better, I think.


After Jimmy Sommerville, Sandra Bernhard covered "You Make Me Feel (Mighty Real) in 1994 (and the less said about this god-awful cover, the better); while Byron Stingily (ex-Ten City) covered it in 1998. Both were issued as singles.

Boy, i was SO excited about the possibilities of this reunion but am gutted that "Roll Out" is such a crap song. Autotuning Patti Labelle? What the fuck? I can only hope that the Gamble & Huff songs are better than this...

I actually like it. Although I only played it a few times!