We won't have to wait: Lorraine finally speaks 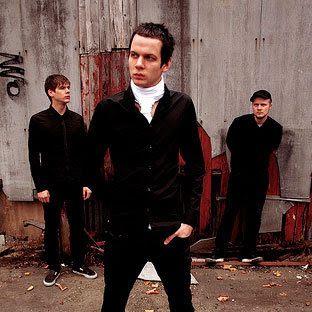 When I discovered the trio Lorraine in late 2005, I didn't even know they were Norwegian. They had released two songs, I Feel It and Saved (video), via the indie Genepool label. These were five-star tunes, with strong melodies, beautiful vocals and a kind of surging, kids-in-the-streets grandeur. Pet Shop Boys' Neil Tennant pricked up his ears, as did journalist Peter Robinson of PopJustice. If you've followed the band, you know what happened - and did not happen - next. A series of false starts and marketing mistakes ended Lorraine's UK record deal before it really began. Since that time, there has been the odd single, like a lush cover Psych Furs' Heaven, but no album and, frustratingly, very little news from the band. I have given up numerous times.

Throughout all of this drama, there's never been a question about the music, so it's appropriate that when the band launched a soaring new song, Tell It All, on myspace, my love for them was completely renewed. Instead of musing on what happens next, I went straight to vocalist Ole Gundersen, which is a pleasure, because he has one of the best male singing voices today. This is short, but it does answer some questions.

XO: Where are you now? Norway? I see that you have shows coming up in the fall?

Ole: We are in Bergen, Norway right now. We’ll do a tour in Norway in about a month, but we’re hoping to manage a few more tours in other countries.

There has been a certain amount of frustration being a Lorraine fan because there’s not been an album and there’s been no real news. And then - boom! - this new song, Tell It All...

We’ve actually recorded that song several times, but we kept coming back to the original recording demo we made in April last year. But we recorded some new vocals and guitars on it early this year, and yes, I think it will be a single.

Have you recorded consistently over the past two years? Can you share any specific song titles?

We are always recording new stuff. We’ve had a studio in Bergen for some years now, but the building was recently torn down. So at the moment there’s a lot of living room recording. And some titles would be: Frances, We’re Gonna Last A Long Time, Can’t Stop Being Without You, etc…. There are quite a few…

Have your influences evolved during that time? You seem to have remained true to your sound.

We are what we are, and I think everyone in the band agrees on what Lorraine is all about. It's not like we ever sat down and said we’re gonna sound like this and that, the sound of a group is a very magical thing and it just happens, I think. We all listen to a lot of different stuff all the time and whether that affects our music or not, I can’t say… probably…

Am I right that Neil Tennant has been supportive of you?

Yes, and he’s become more and more of a friend actually. The Pet Shop Boys were some of the first to pick up on us in the UK you know, talk about us to the press and writing about us on their web site and fan magazine. He’s even helped me buy clothes.

Okay, the big question: Will we hear an album? I’ve been worried by fake track lists and thinking, “Oh, I know all these songs.” Tell It All has sort of renewed my faith that there is good material we have not heard.

Of course the album is coming! And there will be a lot of good stuff that nobody has heard before!

Is it really called Pop Noir or is that just made up fan jive?

Oh no, that’s no made up fan jive. Pop Noir is the title of the album at the moment…

Thanks so much, Ole. This new single really has lit me up about your music all over again.

Lorraine will be playing dates in Norway this September. Details on myspace. Bring on the pop, the noir and everything in between.

Lorraine I Feel It:

UPDATE: Lorraine's studio burned down after I did this interview, so they started fresh with a new name inspired by the fire: Black Room. The album Pop Noir was released online in March 2009. See Black Room tage below for more info.
Posted by xolondon

Great to have an update on Lorraine. I would like some cd release date info etc., everything still sounds a bit vague.

"Tell It All" is my favourite song at the moment.

To be honest, my follow-up re release timeline went unanswered. I held this for a week or so hoping to get something more, but alas that's it. ???

This is marvellous news, they really are a top class pop act.

Thank you for this interview! The ball and chain was just asking about them the other day and wondering why we never saw an album at all. Forwarding this now...

How very handy that you happened to be spaeking to Mr Lorriane! :-)

In addition to their new album, I also love their quiche. It's the best.

Well, yes, DanP76, I was lounging with Ole and Neil and our usual madding crowd. But of course...

I've been stalking Lorraine for some time now. The last time I met them was in June when they played a small gig at RAK studios in London. They're all lovely guys; I have a bit of a crush on Anders in particular :) I think it was me that showed them the Pet Shop Boys fanclub magazine in which Neil listed I Feel It/Saved as one of his favourite records at the time. They were all quite thrilled by that. Can't wait for the album. Hope Tell Me Where You Wanna Go is on there as it's a fave of mine. Strangely, Tell It All has yet to grow on me.

Lorraine put out an album way back when before "I Feel It" (the original, five minute version even) was recorded. I actually own it, hah. It's called 'Perfect Cure'. It's a bit darker than anything they've recorded recently, but fantastically-Lorraine-y nonetheless.

Feel free to hit me up on my blog for more information if you'd like!

Lorraine have relaunched as black room.

Check out their new myspace:

Check out their official lastfm community:

The new album will be released soon!

Thanks Maren. See my Feb 10 post with the (supposed) album cover.