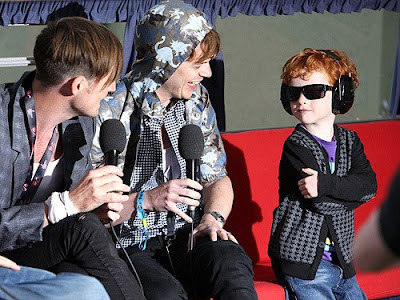 Sonny Ellis-Bextor-Jones is like 4 and way cooler than me. That's him with Daddy and Uncle Dan. Anyway, some trainspotting:

The Script CD is fantastic in an easily listenable, singalong way. It's slick as an oil spill and essentially Maroon 5 without that quintet's wearisome spectre of pussy-on-demand. Standout tracks for me are Before The Worst, Talk You Down, and Breakeven. This album is worth your shillings.

New Order is about to go down Remaster Road. Here is some info on the bonus discs. My fave New Order songs are not deep cuts, but quite secular: Shellshock, Regret, Ruined In A Day and Krafty.

I am still not getting the love for Lady Gaga. It's something to do with the level of (crass) urban-ness in it and her overtly self-aware presentation. She seems to me like someone who wants to be a big star. I know mine is not a popular opinion, but word is that she's a bitty, so who cares. I dig real people, not Star People.

The love for Sugababes new track Girls (listen) also baffles me. Is it all that? I think not. Having said this, I've rediscovered Undignified from album 5 (listen).

I think Van She's song Changes (video) is similar in style to the group Tigercity, who produced the sublime Powerstripe earlier this year.

Good Gravy Marie! Solange's album is a shocker. My favorite song now is Cosmic Journey (hear it), which is the type of thing Hard Mandy should have done this year. I'll try to review the whole Hadleyangel Blablabla soon. One issue: on some songs Lil Sis tends toward a shrillness I cannot tolerate. You can hear it on I Decided (watch it), but Sandcastle Disco (watch it) is superb.

The newest free Pretenders song, Last Ride, is better than the others (most are dire), but oh howthemightyfall. It's like Chrissie is trying to prove she is not old - and she is old. That does not have to matter. Remember the days of Hymn To Her and thoughtful production? This new CD was recorded in two weeks and it shows.

I am recently obsessed with two "oldie" songs by toothy 80's gamine Pat Benatar. Two grandiose ballads: Run Between The Raindrops and Le Bel Age. Both from her 1986 CD Seven The Hard Way. A title I did not get when I was 15. I love these songs... come back to the five and dime, Patty B, Patty B.

Do a youtube search for the new Oasis single Shock Of The Lightning (video) and it will say "Did you mean: oasis shop of the lightning?" This is not a proper song, people, it's a bloody loop. Weak weak weak, especially given the brilliance of new album track Falling Down (listen), which is exactly the type of lush, rhythmic beauty this group should be creating. The fact that the good song is sung by Noel is not lost on me. He's a far more expressive singer at this point. He needs to ditch Our Kid.

In the BritPop world, I sampled a new act called Theoretical Girl and found her wanton wanting. Songs not fully formed. The School, however, is better and closer to the Lucky Soul slash Camera Obscura vein. Sounds like a great debut will soon hit us. Their new single is the sweet Let It Slip (video).

Finally, the new Glen Campbell album (72, with some well done plastic surgery!) has a faithful cover of Sing by Travis. Please note that everyone on Earth should be forced to own Glen's gorgeous song Hey Little One. My GOD that song is epic. His new covers of U2's All I Want Is You and Green Day's Good Riddance are also lovely. Explore the album's microsite.

One last pic of Wee Sonny with MamalaBex. Have you heard he is the new singer for Radiohead? 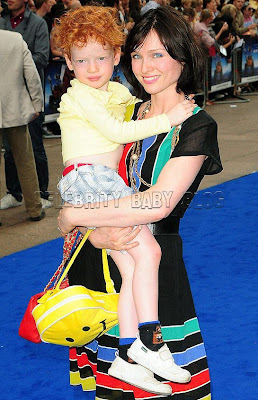 thanks for the updates. indeed SEB's son is a cutiepie!

re: gaga, i think pop music is really missing a heroine right now and has been for a while. gaga somewhat fits the job posting with her bravado. yes, she is a little overt, but a little ambition and drive never hurt nobody. time will tell; it doesn't seem like the american public is feeling her as much as we are in Canada.

Thanks for calling out boring GaGa and the lame new Sugababes trash.

But you forgot to mention how we did the finger-dance in the Wal-Mart housewares aisle while Katy Perry played over the muzak.

Will - is that Will W, the singerman? If so, I tried to email you twice with two bouncebacks so I gave up!

Dluv, you were humming Katy while fellating rifles in the WalMart gun section if I recall...

I agree with you 100% on Gaga. I don't think her music is very exciting and the "pop music will never be low brow" thing makes me roll my eyes.

Oh so much good stuff here. Where to start? SEB's son is freaking adorable. It makes me want to reproduce. Let's not forget SEB's husband is the real hottie in the feeling... The Script's album is definitely very sleek and polished and I am liking a lot. It's got a hint of urban maroon 5 - poor Adam demeaning himself by talking about that tennis chippie :( I will have to forgive him soon though!

I actually like Lady Gaga's album well enough. I don't think it's the second coming or anything, she seems to have borrowed her sound from Wynter Gordon (who borrowed it from everyone else) and her promotional tactics? UGH! Reel it in luv - she was sending that cd to blogs that do nothing but post illegal music to download but forbidding them to post it. It's not like these mp3 blogs review stuff! And Will W - i emailed him too and it bounced?! Did you read the review of his album on fabtastic - brilliant!

New Pipette Anna co-wrote the sugababes single fact fans. i still think that when the HQ and remixes and video drop, that people will warm to the tune a lot. Boo to them not singing it a v festival though. Ruthiepoos and I had totally worked out our strut.

ok that is more than enough!

From what I can tell, Gaga took the Katy Perry route, which was two-pronged: 1) Major label backing, promo singles (physical, not digital) out to every blogger in the world. 2) Leak songs to blogs, songs that will not make the album, but imply they are on the album. Create a buzz on the MP3 blogs that this is SOMEONE. Keep the blogs strung along until the actual release. It will only work if the music is basically not awful, so I'll give them that much.

I emailed that Will W guy, too, and it bounced back. Wha?

ACTUALLY, XO, if you want to get technical, you had a rolled-up copy of Women's Wear Daily shoved down your throat while the girl at the pretzel stand put mustard on your hot dog.

I was simply buying a pack of Chicklets.

Yes it is Will W the singer. He is amazing, fall at his feet peoples!

And um, isn't Bextor's kid a little old to be carried around like that? Bitty! Bitty...

The Oasis song is surprising. I kind of forgot about them... since high school.

I see what you mean about GaGa, but I think that she is doing something different, and I like that. I also think she has real talent, which is backed by the great pop in her album.

Shane, I think Sonny Jones is only 3, so not to young to be carried around. I'll be Sophie is tiny herself! The daddy is not very big: 2 years back I saw sleeping on a couch in a Borders in Nothern VA. Long story!

Theoretical Girl is ace. The stuff on her myspace is rough, but I have high hopes for her album. You should check out her acoustic profile www.myspace.com/theoreticalgirlacoustic

I don't get Gaga's stage persona and style, but the album is very good. Took a few listens to get her vibe, true, but I'm on board with her now. The girl has drive and so did Madge back in the day when she cared about her music and charting. (Not that she's Madge...that's not even what I'm saying, but she's using Madgie's strategy.)

Gaga has the #1 song on the Canadian Hot 100 this week, beating whore Perry, so that says something too. And I believe Mr. Will-W informed me that Lady(io) G has the #1 album in Canada this week too...

Yes, yes Yuri. Gaga is topping Perry right now but only after Perry held onto #1 from like Passover to Hannukah (in Canada).

And yes, D'Luv and XO, Gaga and Perry may have their own strategy for world domination via bloggers, but my strategy involves sending promos to bloggers and then purposefully making their e-mails repeatedly bounce to peak their interest. brilliant, yah? :p (sorry again about the bounced messages!!)

....are you digging your nails into The Library yet? I have had "You Don't Need No Doctor, Suguar" for weeks now. It's instantly chill-inducing. thelibrarywilleatyourprivates.com has an e-kit where you can download some tracks. Discuss.