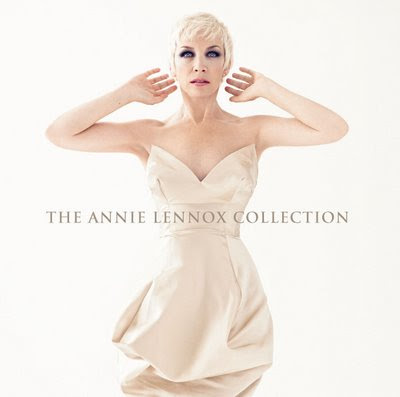 Out September 15. Only 14 songs? Here is the tracklist:

If I were doing this collection, this is what it would be (my changes in red):

Clearly, there are some non-singles on my version. Did I forget anything?

Read my review of Annie's last CD - and my other Annie posts via the tag below.
Posted by xolondon

Boo! Where is Into The West?

Michael is right, Into The West should have been on there. It's a non-album track, a grammy award winning composition and a firm favourite with fans.

14 tracks is such a waste of an album. I'd have also included Put A Little Love In Your Heart with Al Green, as that was a huge hit in the UK.

Will there be a DVD?

PS Was it intentional that you booted off 'A Thousand Beautiful Things' on your own version of the tracklisting?

Yes! I think that song is fine, but it's not a favorite. I totally forgot about Into The West. It should be on there. I'd lop off Step By Step for that one.

GORGEOUS piccie of Annie. I'm not that familiar with all her works but i generally end up making my own hits / songs collections because i'm always disappointed by the omissions the artist/record company makes. My humble suggestions (adding those intruiging sounding new songs...)

I don't have step by step. Is that her version of the Whitney song she wrote?

Agree on Into the West and Money Can't Buy It (Love the "rich white girl" rap there). I'd also like to see Thin Line Between Love and Hate. Sure it was a cover, but Annie sung the hell out of it. Maybe Primitive too? She could easily extend the Collection to 2 discs.

Paul - Step By Step is a version of the Whitney song. I remember searching for it like crazy and then being a bit underwhelmed by it in the end.

I will add my voice to chorus decrying the lack of "Into The West." I wonder if there's a rights issue there since it is from a film? I don't know, just guessing.

I was just listening to Songs of Mass Destruction the other day and was struck once again by how good the album is. It was surely one of the best of last year.

Like your blog!
Checkout mine, too.
THE ANDREWS SALZBURG REPORT
Peek inside the journey of a celebrity journalist . . .
http://danndulin.blogspot.com/

Step By Step is an Annie song that Whitney not only covered but actually sort of sang over. I think it's the same backing track.

Thanks for the comment Dann - you seem to be very busy!

can someone post STEP BY STEP!?!?! i had no idea Annie did her own version before Whitney, and it's my absolute favorite Whitney song ever! Please...since it's long out of print and we obviously are not getting it on this GH!

A few weeks ago We Let The Stars Go did a HUGE Diva post and the URL to get Step By Step is on this page:

I'm sure I will catch some hate, but this seems rather pointless. Two new songs written by other people, and NO Into the West? At least Love Song for a Vampire made the cut. Still, with five songs from Diva, they may has well have issued a remastered version of that with LSFAV and Put a Little Love in Your Heart added (a TRAVESTY to leave that one out).
Could have done the same with Medusa, adding all the great B-sides (Heaven, Ladies of the Canyon, Presence Dear, Don't Let me Down--a Diva-era track but a cover, and the delicious Mama from the Avengers soundtrack--a Sugarcubes song). Guess they have to milk us with two new songs though. Where is Coloured Bedspread? I detest Sing.

Oh, and I always thought Stay By Me should have been a single.

I love Mama. That song has big boobs, literally.

As for Stay By Me, that is a classic fuck song. It's sort of the comedown moment after you work it hard to Jane's Addiction's Three Days...

I never said this was a family blog.

thanks for the link.

and what a disappointment.

the whitney version is aggressive, exciting, electric... annie's is dreary and boring, and the lyrics aren't the same os the whitney recorded one.

cest la vie. i can't believe they aren't including an OSCAR winning single on her best of, let aone amazing tracks like Mama and other hard to finds.

You have such a way with words ;)

17Days (nice Prince reference?!), I think what happens is you get used to one version and then it's hard to hear another. It is more tame, I suppose. How's this - Annie should send it off to Stuart Price or Soulseekerz for a remix?

There's a reason the Step By Step lyrics aren't the same. Annie wrote them LONG before Penny Marshall approached her to re-write them for "The Preacher's Wife" for Whitney to sing. Give me Annie's version any day over Whitney's (yes, Annie does sing uncredited backups on the song). The original track appeared as the b-side to "Precious", and on the Japanese release of Diva.

It is nearly impossible to choose only a few; nevertheless, Smithereens was a wonderful song on her woefully neglected Songs of Mass Destruction--frankly, it should have been the lead single from that collection--it should definetly have been represented here. Her reading of "Whiter Shade of Pale" was lovely, as was her cover of "I Can't Get Next to You," which was far better than the original. It is a travesty that "Into the West" was left off of the collection; she beat out Sting and Alison Kraus for the Oscar that year, and gave a stunning performance on the live ceremonies.

I would also like to disclose that a great injustice was done in my life when Bare was released, containing one of the all time terrific break-up songs, "Erased." Wouldn't you know it that by then I would have finally found the love of my life, and was unable to make good use of it. Sigh... ;o)

It's never too late to break up, love.

And then you can sing Was It Just Another Love Affair and change your mind.

I'm still disappointed that the last album wasn't nominated for album of the year at the grammys!! Makes no sense!

what about waiting in vain?
some great live versions of it too

I agree Scott B. And Robert, I think maybe I should switch Step By Step for Waiting In Vain. Have you seen the weird Minnie Mouse video for that one, btw?

I would add Coloured Bedspread in an extended dance format and Money Can't Buy It. I am surprised that there aren't more songs from Bare album, her voice is completely different on that album. She definitely needs to add Everytime We Say Goodbye, that was a better song than Sing.

What about "Don't Let it Bring You Down"? Its inclusion in a key scene in "American Beauty" (Oscar winner for Best Picture) guarantees the track as a future classic.

Stay by Me is just about my favorite song of all time. As far as I'm concerned, it's her best song from her best album. Her cover of Waiting in Vain is also great.

I agree about The Hurting Time.

To answer an earlier question - yes, Hush Hush Hush was written by Paula Cole. Beautiful song and kind of a hidden gem.

Completley lame that there's no "Put A Little Love In Your Heart," but glad "Love Song For A Vampire" is on there. Other than that, it's kind of a useless release since she's only had the four albums over a 16 year span. They'd be better off just re-releasing the four with bonus tracks, b-sides, etc.

i'm still waiting for a complete Annie Lennox set including her work under The Eurythmics. this release is a complete cash grab considering her recent contract termination. :( - will-w. -