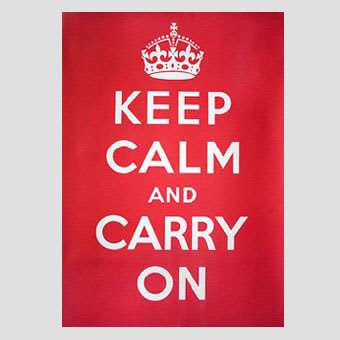 That's my new mantra and a new poster I just got for my house. I need to frame it - it's British, of course. If you want one, I got mine at reformschoolrules.

I agree with D'luv that Keane's new Lovers Are Losing single is d'luxe. This time it references 70's Bowie with a Heroes synth. I love the double-tracked vocals: Tom is back to those luscious romantic tones that were so prominent on the debut album. God Save The Keane.

Roisin news: Movie Star has a suitcase full of remixes coming. Full deets from the Hopeless Optimist. I am sad to report that I don't like what I've heard of her Slave To Love cover, but I'll hold final judgment.

Imogen Heap has postponed her new album until next year. She says her deadlines were too stressful. BUT she has a new song with Nitin Sawhney out on October 13. The album is cleverly called London Undersound.

Missing in action: Deepest Blue had a great single, Miracle, out last May and then... nothing. And what happened to the new West End Girls CD?

The Sugababes song still does not thrill me, but it sounds better in high quality. It's not your average radio fodder, I'll give them that.

EMI seems to be in freefall. As much as everyone hates Guy Hands, this is not good news for music fans. Captain's release date has come and gone. The band has stopped updating their site, so one assumes vair vair bad news. Label-mate Lily Allen recently made a comment on her blog that may she some light: "The record industry is a very political place at the moment and I am on EMI records , lots of people have been fired or have taken redundancy recently as the company was taken over by a private equity firm called Terra Firma . Many of these people were people assigned to my projects and now i don't quite know whats going on."

Kate Havnevik is recording her next album with Guy Sigsworth in Krakow (?!) right now.

A week ago last Friday, I had a very nice time talking music, etc, with El Marveloso, who is As His Name.

Yes, I too love Marit Larsen's brilliantly titled new song If A Song Could Get Me You. The bridge on this song (I guess it counts as the bridge?) is stunning, from like 1:23 to 2:08 ish. A PJ Forum person pointed out that she sounds like Dolly Parton and it's true.

Nineties: Following up on my Sarah McLachlan comments a few weeks back, I noticed this gem of a sentence in her recent PR: "U Want Me 2 will impact your radio waves and digital retailers instantly. Be the first to own this piece of the abiding Sarah McLachlan legacy on August 12th by purchasing U Want Me 2..." Abiding? Oy. Truth is, I like Sarah's music.

Eighties: Boy George's next single is indeed the Barack Obama-inspired Yes We Can and it's lovely. Listen to a clip now via boygeorgeuk.com. More on George this week.

And I had a lovely time with you too. I could have spent another 5 hours talking with you!!!

I can't believe West End Girls never got a U.K. release. Surely there's some indie label that could throw that trash out?

And, yeah—it was "What Have I Done To Deserve This" in the spring then...nothing?

I have that very same poster framed and displayed on my kitchen wall, except mine is in eggshell rather than red. I'm sure it's going to look smashing in your pad.

Keane is good, again. I played Spiralling to death!

Boy George sounds good too, he can do the business when he tries.

Nitin Sawhney's old stuff was great so I shall check his latest p[roject out at some point.

Andrew that is wild re: the poster! Great minds, great minds.

DP76, my Nitin mention keeps leading to these comments (twice on this post) from Web Sheriff about how glad they are that I am not hosting illegal material.

Web Sheriff folks: I will continue to delete your comments. I don't want promotional shit in this field nor do I want your Big Brother tone on my blog. I appreciate your efforts to prevent illegal distribution, but email me if you feel so inclined to comment.

I'm also puzzled as to what is happening with Deepest Blue. . .'Miracle' was a great single but the album seems to be M.I.A.

I think you have to give Roisin's 'Slave To Love' a few listens. It initially left me cold but on repeated listening, I've actually come to love it. I appreciate the originality of her version (it's not just a note for note retread) and the rhythm strikes me as similar to Blondie's 'Call Me'. I think in HQ, it's going to be even more impressive.

I agree with you about Sarah McLachlan and the abiding legacy. Um, yeah, sure if you want to believe that. But not quite.

And can we ban the use of Sarah's "I Will Remember you" in all trailers for 10 years? Please. Please.

Monkeydrum you are mysterious. Who are you!? :)

Babs, brilliant call on I Will Remember You.

I'll be devastated if Captain's "Distraction" doesn't surface, it was possibly my most eagerly anticipated album of the year.

I feel the same Ross! Email me though, okay? xolondon@gmail.com

Who am I? No one of consequence ;)

As for mysterious. . .lazy is more like it. I just never bother to create public profiles.

Anyway, you have great taste. Love your site. Keep it up!