Kick down the door and throw away the key

Following up my post last week, some news on the Annie Lennox Collection DVD. It includes 14 videos and... I . AM. PISSED! It's missing my favorite video, Money Can't Buy It. Give the woman a towel, some belles fleurs, a mirror and voila, genius: 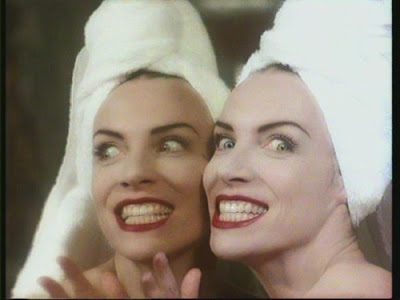 Never seen Something So Right? It's pretty rare. Watch it now...

My good friend Mark (who incidentally I met while he was showing a friend in a club a phone video of him "pleasuring his boyfriend orally" and i made some brilliantly witty comment" is also pissed by that omission. For me it's all about this on TOTP back in the day...

As far as I'm concerned, they should have just included the entire Diva video album. Seriously, are people going to go back and buy just that by itself again?

Now the Savage video album should have also been with the Eurythmics hits video album too...

I'm really pleased to have 'Little Bird' on DVD however I suspect these two collage videos will merely be still images on a loop for the duration of the songs. There's a live acoustic performance of A Thousand Beautiful Things from the Bare era that could have been used instead.

At least we're getting Love Song For A Vampire too.

I too would love to see Savage and We Too Are One Too on DVD. I have home made copies from VHS, but it's not the same.

Sorry that should have read We Two Are One Too. Oops.

That Money Can't Buy It video is a diva moment if there ever was one. I love that video as well.

I had the same suspicion as Andrew re: "collage videos" That seems rather lazy when there are perfectly proper videos that are being omitted from the collection.

As for the collage videos, I would guess they feature clips from all the Diva clips and live footage (Central Park) etc.

Did you hear this got pushed back to March 2009? Too bad, but apparently it was because Annie got hurt recently and she (and the label) wanted to be able to promote this properly.