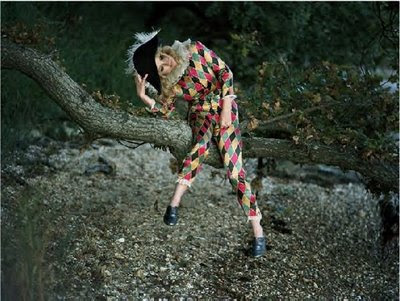 Goldfrapp recently appeared on NPR's World Cafe Lillywhite Sessions with famous producer Steve Lillywhite in Manhattan. They performed three songs (A&E, Road To Somewhere, Eat Yourself) and did an interview. You can download the session as one long MP3 via the July 10, '08 post at Goldfrapp.fr or here as 3 files zipped.

I don't think she has ever sounded so crystalline (which, in this case, means perfect). The harp-laden performance of A&E is breathtaking. It's hard now to believe they ever did electropop and glam stompers. We are over halfway through 2008 and no album even comes close to Seventh Tree. To paraphrase Road To Somewhere, this album is a friend that guides you.
Posted by xolondon

I think Seventh Tree is artistically stunning. Indeed one of the top albums of 2008. Too bad it hasn't done better on the charts/in sales. I recall a comment Alison made before doing Coachella or one of the other festivals. She said something to the effect that folks are going to be sort of bummed out because the GF set is so mellow in comparison to the parties that are going on in other tents. Also, I read a concert review, and they didn't perform "Ride a White Horse" at all during the set! Sacre bleu! I guess what I'm attempting to say is that I love both the artsy/7th Tree Goldfrapp as well as the disco stomper GF too. It just shows how talented and creative Ali and Will are together as a team. Great stuff!