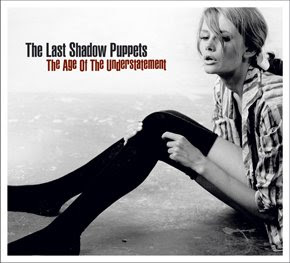 Nobody saw Alex Turner coming. By all rights he should be nothing special, but he has, at 22, become one of pop music's best lyricists. His two albums with Arctic Monkeys, shittily recorded though they are, feature some of the wittiest lines shot out of British radio in years. Not one to rest on his laurels, Turner and his friend Miles Kane are releasing an album under the moniker The Last Shadow Puppets.

The CD and single have the same title, The Age Of The Understatement and the sound is very 60's Bond, though the duo cite Scott Walker as a major inspiration. Owen Pallett of Final Fantasy arranged the orchestrals, which were recorded by the London Metropolitan Orchestra. If you have not seen the very expensive looking first video, watch it now. I love the lyrics to this song, especially: "And she would throw her feather boa in the road/ If she thought that it would set the scene" or this bit on the chorus, "But before this attraction ferments / Kiss me properly and pull me apart." Pretty epic.

The Age Of The Understatement is out in the UK & Europe on April 21st and in North America on May 6th. Note that the single has a perfect version of David Bowie's old song In The Heat Of The Morning.
Posted by xolondon

The single is amazing. The album falls a little short of amazing but is still in the Very. Good. category. Better lyrics than Alanis anyway :P

I'm not really a fan of the Arctic Monkeys, although I liked a few tracks. This single blows their output away.

I liked this song better when it was released the first time, and called Knights of Cydonia by Muse. Hmpf!

I adore the album and the single.

Yes, duanemoody, because apparently once Muse takes inspiration from somewhere, it's then closed off to the rest of popular culture. You're secretly Matt Bellamy, aren't you?