I do believe that we are practicing the same religion 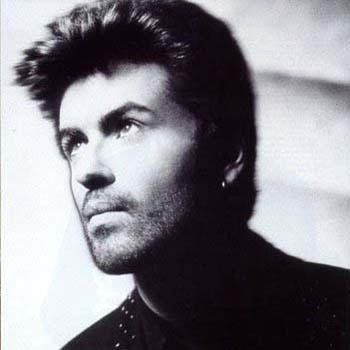 Last week I promised to do my Top Ten Plus One (or Two!) Favorite George Michael Songs. Truly, my favorite is dippy: Last Christmas. But that's Wham and this list is solo material, no covers:

My favorite is, without a doubt...

Fastlove
Everything is perfect. The casual sex theme is refreshing really. I love the bit at 3:25 where the song breaks down and shifts into an amazing middle eight: "In the absence of security.." when you realize that the whole tramping around behavior is a reaction to the loss of his lover: "I miss my baby tonight" One of the best uses of a sample (Patrice Rushen) ever.

followed by, in no order:

Freedom '90
Perfect encapsulation of its era. He did a great version of this for MTV's Anniversary too. Anyone have that?
Something To Save
It's the songs that don't try too hard that are often the finest. This song stands up to the great pop artists of the 70's that George idolized: Elton and Stevie Wonder.
Jesus To A Child
This came out around the time of my first trip to England. A bold choice for a single: a pristine 7-minute ballad. The part at 5:17- "for every single memory has become a part of me" - always gets me. Heartbreaking.
Do You Really Want To Know
This was released at the heighth of AIDS paranoia and education. He could have done a great video for it.
Waiting For That Day
I love these guitar, piano, bass tracks. Very organic and lowkey.
Kissing A Fool
Jazzy, smooth George. If you are a pop fan, you have probably attempted to belt along with this song. And failed.
Precious Box
Just a few years old, this song returns to the elegant disco of his earlier records.
Too Funky
A strutting dance track. I have a memory of this song that I cannot share on this blog!
Round Here
There is often a lof of love in George's lyrics. This is a sweet memory of Wham/Andrew - a take on Elton's Captain Fantastic, autobiography as pop tune. "Let me show you where I lived... music felt like rain to the streets."
This Is Not Real Love
I think I am the only person who loves this song. Mutya is brilliant and GM was sharp as a tack to choose her.
Waiting (Reprise)
This is here for the final lines: "Here I ammmmm" - I'm pretty sure he opened the Cover to Cover Tour with this, but he sang it - ironically - from behind the curtain.

My favorite covers - he does a lot of them - are: If You Were My Woman, I Believe When I Fall In Love, I Can't Make You Love Me, Killer/Papa Was A Rollin' Stone, Edith And The Kingpin, As, and First Time Ever I Saw Your Face, These Were The Days Of Our Lives.

The version above predates the one you know best. Here is what Wexler said about it:

George is a very highly evolved young man, very intelligent, well-read. When he left for England, I gave him for reading material a collection of short stories by V.S. Pritchett. Now, that's not everyday rock 'n' roll fare. So we did the record, and then we did the strings in Nashville -- real strings -- and I got a certain fee and a percentage. But then they went back to England and redid the record with synthesizers instead of real strings, and that's the record they put out. The version I did with the real strings I think came out in Japan and sold 11 copies (as a 12-inch single). A couple of people I know have it on an LP. So I was gloriously screwed, and all I can think of is, they wanted to avoid my royalty as a producer. I don't know why.

My least favorite may be Shoot The Dog. I'm surprised George didn't get better use out of the Human League sample.

Agreed about Shoot The Dog - I also don't like Freeek very much.

Thanks SO much for the Jerry Wexler version of "Careless Whisper". I've been wanting it for years and was extremely excited to find it winking at me at the end of your post. Many, many thanks! Lovin' the sound :) Shame they didn't work together for longer...

Wow, I never knew there was a Jerry Wexler version of this song. I can't help but think that it would have sounded a bit out of date at the time.

Funny, I saw Atlantic Records: The House That Ahmet Built last night and based on the portrayal of Wexler, I'm a bit surprised he was working with GM.

Thanks for sharing that version of Careless Whisper. I actually really like the way that the last portion of this version seems like it builds up a bit more dramatically during the final portion whereas the official version sort of drifts off after the final chorus.

Also, agreed about Fastlove. It's definitely one of my favorites of George's and turns sleaze into sensual. A great sexy song.

Wow, who knew about that Careless Whisper? A revelation for me. And Jerry Wexler attended my alma mater, but for some reason his name was never mentioned to me in six years there, and I was a music major. Go figure.

Agree about Fastlove. Love Freeek as well--(sorry XO)--what a sleazefest THAT is, and a crazy-great video to boot. Songs like Shoot the Dog and Easier Affair seem almost too topic-specific to really love, but are at least enjoyable (for me).

My faves: Young Guns, Freedom, Freedom 90, Fastlove, Too Funky, Freeek, I'm Your Man, Father Figure, Jesus to a Child, Something to Save, Careless Whisper.

My favourites - including Wham! material - in no real order either:

There are more, but they get the most plays. My aunty shaped my love for George (she also introduced me to Madonna as a child) was quite obsessive in her love for him. When she got married and had kids years ago, she decided to hand down all her old GM & Wham vinyl to me. Some amazing stuff in that pile!

If I had included Wham, I might have added in Last Christmas, Freedom, Careless Whisper (which I consider to be Wham) and maybe I'm Your Man. I also love their cover of Where Did Your Heart Go?