I believe the friendship can survive

Mlle Murphy: Behind The Scenes At The Video Shoot

Be sure to check out this fantastic post from Wongie with some great videos and her new b-side Keep It Loose, which sounds like something Prince was doing around the era of Hot Thing (1987). I commented to Wongie that Roisin is a point where she can do no wrong. She is whipsmart and foxy. Behold her Imperial Phase!

Here also is a brilliant piece on the styling of the video. It covers the inspiration of Cindy Sherman and shows the clothing as it appeared on the runway. Thanks as always to The Hopeless Optimist for the good reportage! 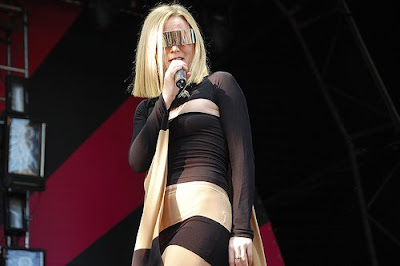 Keep it Loose is mammoth! Roisin amazes at every turn. It will be interesting to see where she goes from here. Such a shame the best song of the year could not crack the UK top 40. I would say "their loss", but it hasn't even been released in the states. That being said, my store has sold 15 copies, which is quite a bit for an import these days. Maybe she should bring the show to the US to show people what they've been missing? I bet You Know me Better could do better here, albeit with a less mentally challenging music video.

Maybe her next single Movie Star will have an accessible video. I like all her videos, but it'll be interesting to see if she does a performance/glamour type video (see Kylie) for Movie Star. That song is SUCH a massive club banger, but I know that somewhere there is another time/space continuum where Casey Kasem is introducing You Know Me Better in its 5th week at #1 on the Pop Charts.